The future leaders of Nicaragua are currently in President Daniel Ortega’s prisons, making the release of political prisoners the first step toward building a valid alternative to the Sandinista government, activist Felix Maradiaga told EFE here.

The prominent Ortega critic and academic left Nicaragua after a judge ordered his arrest on charges of financing “terrorist activities,” which is how Nicaraguan authorities refer to the sometimes violent anti-government protests that began last April.

The Harvard-educated Maradiaga was among the speakers at the 2019 Geneva Summit for Human Rights and Democracy Summit, an event sponsored by 20 NGOs that takes place annually on the eve of the main session of the UN Human Rights Council in this Swiss city.

Because Ortega has locked up some of the most prominent opposition figures, foes of the government are observing a tacit accord not to speculate publically about possible presidential candidates, Maradiaga said in an interview.

“There are many names, but the consensus we have is not to start an open discussion about it until the political prisoners are released because many of the most hopeful faces and voices are in jail,” Maradiaga said.

The farthest the government has been willing to go in that direction is an offer to free opposition detainees within 90 days.

“The departure of Ortega through free elections is feasible” and depends on the president’s deciding “whether he wants to govern ashes or accept the bridge of opportunity offered by the international community,” Maradiaga said.

Yet the opposition also faces the task of building a credible political option given that “half of Nicaraguans wouldn’t know who to vote for” if the elections were held tomorrow, he said.

Ortega “has 22 percent support and it’s in his hands to prevent the collapse from being long and painful,” Maradiaga said. “I am forced to be very cold in the analysis and to recognize that no one (in the opposition) has that support.”

While the government has tried to dismantle opposition parties, demonstrations continue in Nicaragua despite violent repression.

The Inter-American Commission of Human Rights found that 325 people died in politically motivated strife, while 642 government opponents are in prison and another 150 under house arrest.

Maradiaga, who held a senior post in the Nicaraguan Defense Ministry under a previous government, said he has no doubt that Ortega is counting on an amnesty as part of any agreed-on political transition.

“It would be irresponsible not to admit that this is what he has in mind, but our role is not to think short-term, and any formula that includes some kind of impunity would not be sustainable and would lead the country to a new cycle of violence,” Maradiaga said.

Though Maradiaga’s wife and daughter accompanied him into exile, the rest of his family still lives in Nicaragua and remain vulnerable to reprisals, such as the attacks on their property that have already occurred.

Amid the threats and the obvious risks, Maradiaga vows to return to Nicaragua “at the moment least expected, but sooner than many people imagine.”

“I will return, one way or another, and I will not wait for Ortega to leave,” he said. 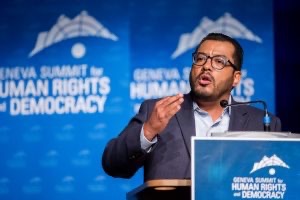 GENEVA, February 19, 2019 — A coalition of 25 non-governmental human rights groups announced today that Felix Maradiaga, a leading opponent of the Daniel Ortega administration in Nicaragua, will share his story at the 11th annual Geneva Summit for Human Rights and Democracy on March 25-26, 2019, which opens at United Nations European headquarters in Geneva,