Editor’s Note: In January 2019, Chau Van Kham, a 72-year-old Vietnamese-Australian, was arrested in Ho Chi Minh after meeting with a fellow democracy activist. After authorities detained him on fake charges of conspiring against the Vietnam government, he was sentenced to 12 years in prison. Mr. Chau was denied a lawyer, and the only evidence presented against him during a show trial was his membership in a group called Viet Tan—a Geneva Summit partner group that promotes democracy and human rights in Vietnam. Weeks ago, I spoke with Mr. Chau’s son, Dennis Chau (GS’20), who has campaigned relentlessly for the release of his father by bringing global attention to his unlawful detention. We spoke about his father’s condition after spending nearly two years behind bars, and how democracies can step up to call for Mr. Chau’s release.

Authorities have denied your family any contact with your father since his arrest. You’ve not spoken to him for more than two years. How have you processed this?

It’s weird. I try not to think about it unless I am actively working on different initiatives or interviews. For me, it’s all about managing the emotions of not being able to be in contact with him. I’m not getting too down or too depressed, or thinking deeply about it. I think of how he would want me to handle it if he were here. He would probably just tell me to get on with it. It’s difficult. It pops up from time to time. It’s a process.

Everyone in my family is trying their best. It’s been over two years now since his arrest. You go through phases of thinking things are okay, and that our efforts to release him are making some impact. And now, we are waiting for the next deadline to come when my dad could be released. But they come and go, so you have to regroup and pick yourself back up when these internal deadlines pass and nothing has changed.

What do you remember about the actual day your father was detained by Vietnam authorities in January 2019?

When this happened, it was scary at first. Really scary. I remember being told that he had been picked up in Vietnam. At the time, I wasn’t sure what he was doing there or where he had disappeared to. It was a situation where he vanished for a while. A couple months later, we learned officially that he’d been picked up by the Vietnamese government. In that time period, we had lost contact with him. His phone had turned off, and we were fearing the worst. Then, it went into a long dragged-out investigation period where authorities kept extending the investigation by three to four months at a time.

Just before we marked the one year of his arrest, my dad had finally been put to trial. The sentences that he was charged with were twelve to fifteen years, or so. He got charged and his detention was reaffirmed when his appeal was denied. That was when the moment hit me that we were in this for the long haul. That was difficult. Since then, it’s just trying different tactics, meeting different people and coming up with different ideas of what else we can try and do to pressure or request the release of my father from either the Vietnamese side or the Australian side. So yeah, it’s been up and down.

As you mentioned, your father’s only chance of a court appeal was rejected in March 2020. Have there been any developments since then?

Officially, no. My father’s case has come to the attention of Australian Prime Minister Scott Morrison, and it has revealed how much the Australian government cares about his citizens versus its profits—Vietnam being a major trading partner of Australia.

In January 2021, my mother received a letter from Marise Payne, who is Australia’s Minister for Foreign Affairs. It states that the interest has been raised to the “highest level.” This was in January 2021. It is now April. Australian authorities haven’t been able to see my father since their last visit in October 2020. If you think back even further than that, the only other visit they have made since his verdict was finalized was in June 2020, so they have seen him twice in the last year or so. This has been hampered by COVID protocols for prisons, which I understand.

Your father has suffered from various medical conditions. Does this concern you even more giving the spread of COVID-19 in prisons?

He is already quite old, and if he got it and he wasn’t treated properly, he would probably get very sick, very quickly. From official correspondences, I don’t know how he would do, but I don’t think he would do well.

Can you share about the scam court proceedings given to your father since the time of his arrest?

So after he was picked up in January 2019, the Australian government wasn’t informed until a couple of weeks later. They were informed and then he underwent two periods of investigation, which lasted four months each. This extended to November, when his trial date was finally set. About a month before that, he was allowed to see a lawyer which he was allowed to see only once before the trial. They took him away for 9 months and gave him access to a lawyer once, or maybe twice.

The trial itself lasted for about four and a half hours. It was not just him on trial by himself. It was him and five others individuals. All the judges are part of the Vietnamese Communist Party. In this four and a half hours, he was found guilty of terrorism for opposing the People’s Government and was sentenced to 12 years for the terrorism offense and the other individuals were also given sentences ranging from three to eleven years.

Given the quick succession and the amount of people, there is no way that you have time to call evidence or have proper process to get through that. Everything is pre-judged and rushed. That says it all, really. How do you wrap up a nine-month investigation in under four hours with five other people?

What has the Australian government been doing to pressure the Vietnam government to release your father? What more can they be doing?

Officially, they haven’t done anything. Unofficially, I don’t know. This could be one of those things that happens behind the scenes and, somehow, miraculously he is released. But, we as a family feel like there isn’t much going on. There are a lot of people saying it has been discussed and both governments are aware of Australia’s interest in the case. That’s the extent of what we know.

How have you continued campaigning for your father’s release?

After I spoke at last year’s Geneva Summit, some volunteers reached out to help and we’ve also gotten some assistance from Amnesty International. My father is now recognized as a “prisoner of conscience” by Amnesty.

More recently, we’ve just submitted an appeal to the UN Working Group on Arbitrary Detention. We also have had coverage from some TV stations in Australia, which was the first time in a while, just to bring more light to the case. This is coming off the back of the key milestones we had in the back of our minds. One of the things that comes up every year is the Liberation Day in Vietnam on the 30th of April, where pardons have happened in the past.

Last year you spoke at the Geneva Summit to put a global spotlight on your father’s unlawful arrest and detention. What does this platform mean to you as an activist and, even more, as a concerned son?

The Geneva Summit has been a wonderful platform. At the time when I was speaking, I did not know what else I could do. I was a bit lost and losing a bit of hope. I thought we had exhausted all options at the time with the media and different outlets, the petitions and letters to governments, and I wasn’t sure what else I could do. What I was most scared about was losing the light on my father’s case. The Geneva Summit inspired me and allowed me to meet other people from all over the world who were experiencing human rights hardships. This brought new connections and, most importantly, new ideas and opportunities that I could explore further. Since then, we have had volunteers from around the world who have helped with drafting official submissions to the UN, or to help connect us to organizations like Amnesty, or reach out to specific news outlets for story coverage. This is not just in Sydney, but also in London and other places, as well. Sometimes you just need a spark, and that’s what the Geneva Summit gave me.

How can people help contribute to the campaign for your father’s release?

For now, it would be helpful to share a petition. There was also previously a letter that we drafted that people could send to their local politician which would help raise the case at their government levels, which could also be of help.

Add your voice to the call to free Chau Van Kham by signing our petition for his release here. 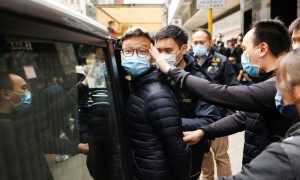 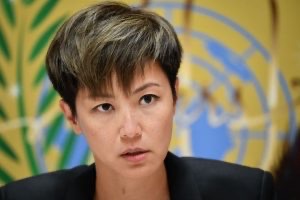 Interviewed by Hilary Miller. Editor’s Note: Denise Ho (GS’20) is a woman moved by the courage of her own convictions. The award-winning Hong Kong-based singer, songwriter and actress is an ardent LGBT rights activist and has become a leading figure in Hong Kong’s pro-democracy movement. She has committed herself to