Ex-Maldives president Mohamed Nasheed was brutally arrested in 2015, and convicted to a 13-year prison sentence on
politically motivated charges. While in the UK for urgent medical treatment in 2016, he was granted asylum.

GENEVA, Dec. 14, 2016 –  A coalition of 20 non-governmental human rights groups announced today that former Maldives president Mohamed Nasheed, one of the world’s most famous dissidents and former political prisoners, will headline the 9th annual Geneva Summit for Human Rights and Democracy, on February 21, 2017.

President Nasheed was the Maldives’ first democratically-elected president before a 2012 coup d’etat reinstated dictatorship. He was brutally arrested in 2015, and sentenced to 13 years in prison. While in the UK for urgent medical treatment he received asylum in 2016.

Nasheed joins top-name dissidents from Russia, Turkey, and Tibet, who be shining a light on the worrisome human rights records of their home nations. See selected list of presenters below.

“It’s a focal point for dissidents worldwide,” said Hillel Neuer, executive director of the Geneva-based UN Watch, which for the ninth year in a row will be organizing the annual event together with a cross-regional coalition of 20 other human rights groups.

“The speakers’ compelling and vivid testimonies will aim to stir the conscience of the U.N. to address critical human rights situations around the world,” said Neuer.

Subjects on the program this year include discrimination against women, jailing of journalists, prison camps, Internet freedom, religious intolerance, and the persecution of human rights defenders.

Admission to this year’s February 21, 2017 summit is free and open to the public, but registration is mandatory. For accreditation, program and schedule information, visit www.genevasummit.org. The conference will also be available via live webcast.

For media inquiries or to request interviews, please email secretariat@genevasummit.org

On the eve of the U.N. Human Rights Council’s 2017 session,
courageous champions of human rights from around the world will
unite to place urgent situations on the international agenda. 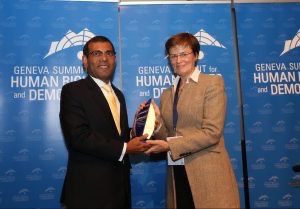