Why our Father is in Prison: a Conversation with the Family of Raif Badawi with Najwa Badawi, Ensaf Haidar 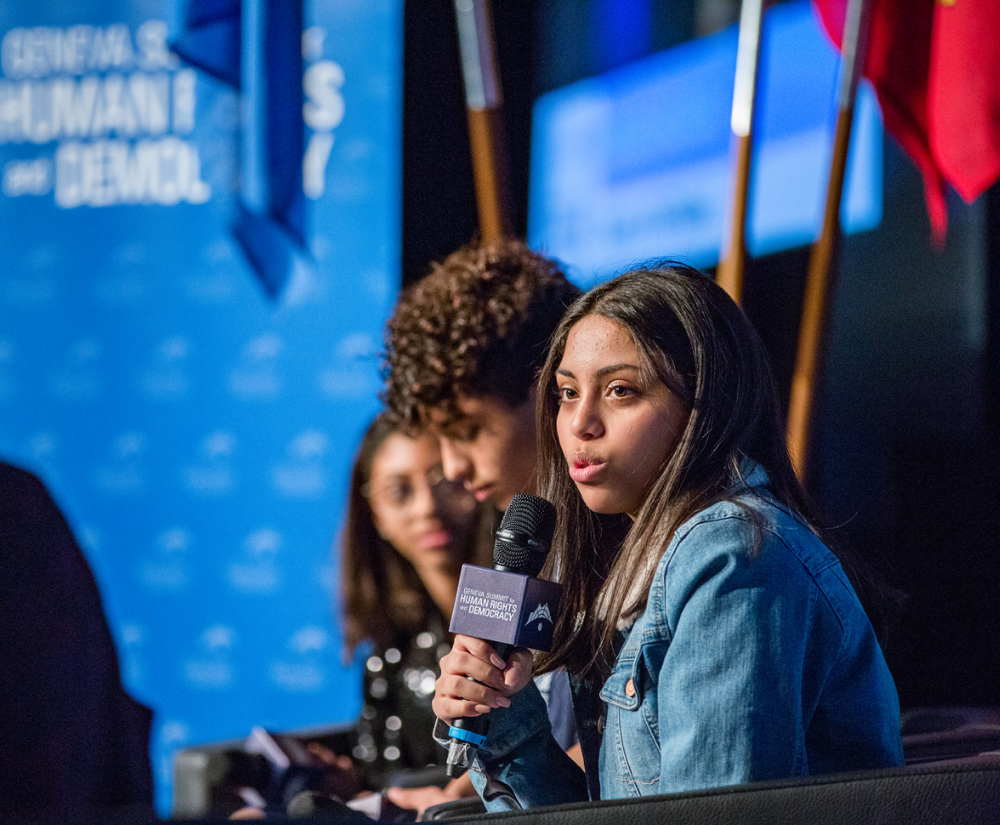 Moderator, Irma Danon: Since 2013, we have been waiting, you have become citizens your father has been considered a hero in many countries of the world, you made a video and you showed it to the Canadian prime minister who received you. Can you tell us about the meeting you had with the prime minister?

Tirad Badawi: We had a very quick meeting. But it was always the same thing. We said we work and try and we always got the same answers. So, before we went, we hoped that it would change something. We were very enthusiastic, but in the end, it was like all the other meetings we had.

Irma Danon: Why today have you decided to come together to give an account?

Najwa Badawi: Because it has been a very long time now and we’ve been trying since the very beginning but it’s not working, and since nothing is happening and and nothing is changing, we decided that if we all got together maybe that would help.

Irma Danon: Since your husband was jailed, you have been working tirelessly, and promised the children’s father not to give them all the information regarding his imprisonment. What changed now that made you think you really have to tell the children and explain to them?

Ensaf Haider: My children don’t have their father but remember him with joy. When Mariam is 12 and a half, and when we left Saudi Arabia, they were very young, and I didn’t think she could understand what was happening – it was very difficult for my children. In 2015, Raif received 50 whips as punishment.

Irma Danon: Yes, it came out in the newspapers what was happening to him. You were contacted and told that you should tell them the truth and that’s when you decided.

Ensaf Haider: I decided they should know what was happening to their father. Because if someone else explained it to them and it wasn’t explained well – I thought teachers might talk about it at school.

Irma Danon: So it was that day in 2015 you found out your father was whipped and was a shock and a turning point in your life, even if the school tried to help you, to provide support. What did you understand at the time about it? You were 11, about to be 16, and 14 respectively. So you’d spent a lot of your life without your father. What impact did this have on you?

Tirad Badawi: My parents always said to us that my father left to go to work and I thought he would come back when his work was over. When my mother said he was actually in prison, on that day, it was a shock for us, even if there was a psychologist or teacher with us. It was very hard for us not to show how sad we felt.

Irma Danon: But you have some contact with your father nonetheless. How do you manage to communicate with him?

Najwa Badawi: Once or twice a week he calls us from a telephone box there. We have five minutes in total to talk to him, to ask him how he is. He talks to us about school, etc.

Irma Danon: Let’s move forward to 2019. What pushed you to work alongside your mother and to speak about what was happening?

Tirad Badawi: We saw that nothing was moving. Our mother was constantly traveling every month but nothing was happening. So we decided that perhaps it is up to us – maybe we should do the same work that our mother is doing and so things will change.

Irma Danon: Mariam, do you also participate in demonstrations and events with your siblings?

Irma Danon: And what people that you’ve met have had an impact on you? Are there well-known people or people in general who have given you hope?

Najwa Badawi: Mark Pellegrino. We were in Italy together and had dinner together in a restaurant. We became friends and now I would like to be an actor just like him.

Irma Danon: There’s something very important. You are young and young people around the world spend too much time on social networks and on the internet. So what is your relationship with the internet, knowing that it is because of this that your father was sentenced?

Tirad Badawi: Our mother never said stop, don’t spend so much time on the internet because she is on Twitter and Instagram constantly. So, it’s fun.

Tirad Badawi: I would do research about my mother and father even before they told us my father was in prison. I had some doubts because I had seen interviews my mother and father did with Amnesty International. I’d seen them but I’d never ask my mother why. I didn’t know what was happening. I didn’t talk about it, but when they told me, it was confirmation of my doubts.

Irma Danon: Do you also have doubts?

Najwa Badawi: Yes, I have my own doubts, because when I carried out research on internet, we had some doubts. People were talking about it at school, teachers, people talked around us about it. We worked a lot with Amnesty and I didn’t know why. My mother always said it was for work but we weren’t sure. When we were told, I realized I knew. It was a confirmation of what we knew.

Irma Danon: It is difficult to live with that information. But sometimes meetings can lead to something concrete – but sometimes these meetings can be random and I am mentioning that because it is a random act that brought you together because of a wrong number. Was it Raif?

Ensaf Haider: It wasn’t Raif, was a friend of his that called, and I found the number and I called and I said “who’s calling?” He said “I don’t know.” I said “Well, nevermind, it doesn’t matter,” and I hung up. And it continued until midnight. They asked about marriage, it was really a case of ‘Romeo and Juliet.’ That’s how he met, he and I. Things can change with one call.

Irma Danon: So, he called by mistake and was enchanted. Do you children think one phone call can mobilize people – if it came from students, for example the international school in Geneva and Amnesty who decided to work together to write a letter? What do you think this letter will achieve?

Tirad Badawi: It gives us hope to think about this. It is not just diplomats involved – but students, kids our age, support us for defending this cause and it gives us hope.

Irma Danon: This hope is now being shared today. If you want to join, you can see it when you leave the room to write a letter. And I think what you said what your father said is ‘live and let live’ – a very important phrase he uttered. I think they deserve a round of applause. 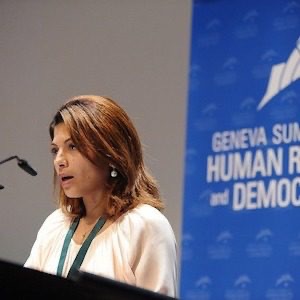 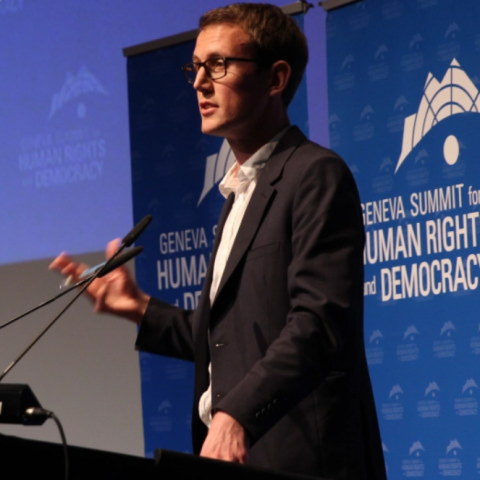 James Jones, an award-winning documentary filmmaker, addresses the 9th Annual Geneva Summit for Human Rights and Democracy – see quotes below, followed by full prepared remarks. On the reluctance of the outside world to condemn Saudi Arabia’s human rights violations: “Unlike North Korea and unlike ISIS, Saudi Arabia is not a 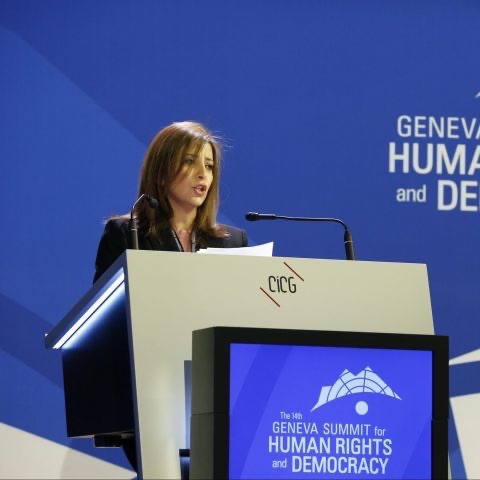 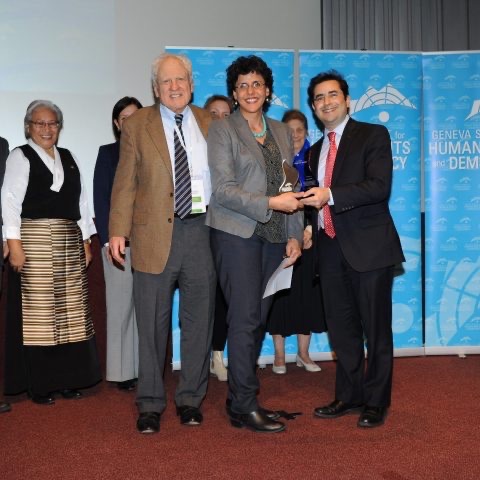 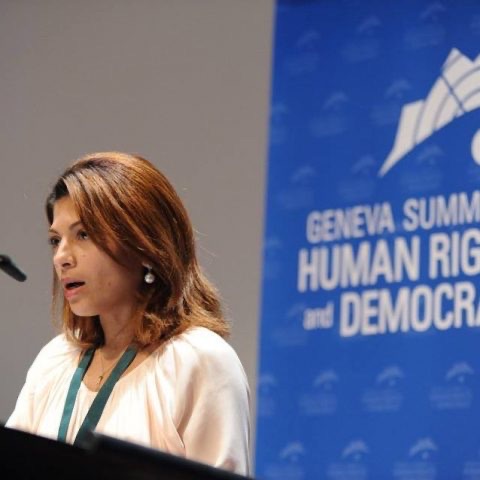 Flogged for Blogging: The Case of Raif Badawi with Ensaf Haidar

Ensaf Haidar, wife of Raif Badawi, a Saudi blogger sentenced to ten years in prison and 1000 lashes for setting up an online platform for open debate, addresses the 8th Annual Geneva Summit for Human Rights and Democracy – see quotes below, followed by full prepared remarks. On Raif Badawi’s case: