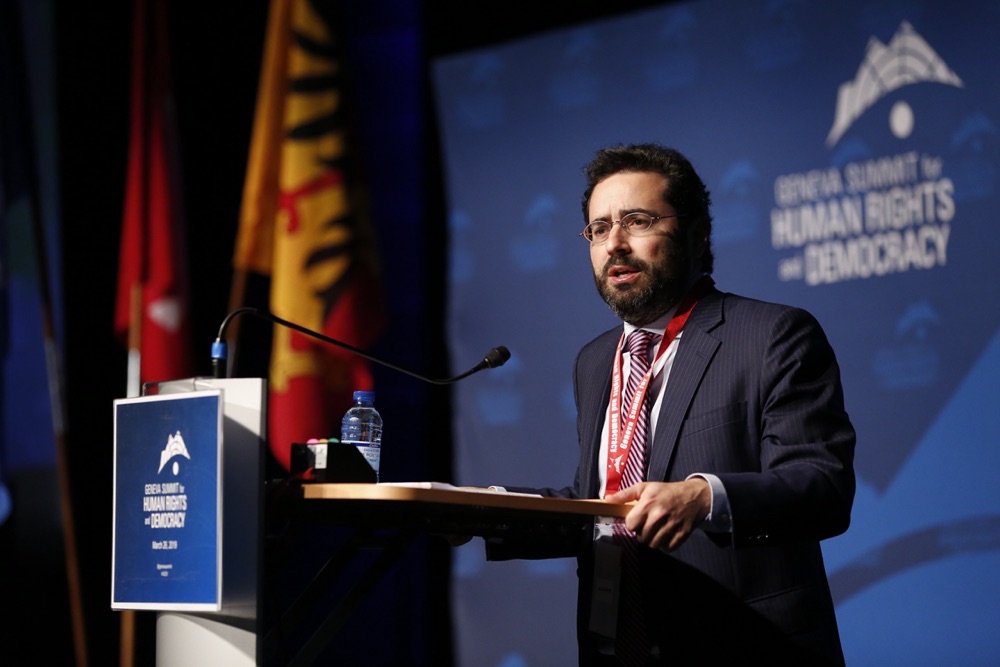 On the UN Human Rights Council:

“We meet only a few days after the conclusion of the main annual session of today’s United Nations Human Rights Council, and although it ended by adopting a handful of resolutions on countries that require the world’s attention, the vast majority of the world’s worst abusers of human rights received immunity. They received impunity.”

On the Geneva Summit for Human Rights and Democracy:

“We have assembled here today the moral force – some of the most courageous men and women around the world – and our pledge to them is to listen to their words, to do everything we can to help them, to pressure our own governments.”

Distinguished members of the diplomatic corps, ladies and gentlemen, friends, welcome to the 11th annual Geneva Summit for Human Rights and Democracy. My name is Hillel Neuer. I’m the Executive Director of United Nations Watch.

I want to begin today by thanking all of our 25 human rights nongovernmental organizations from around the world that have joined with us today to co-sponsor this event.

A few months ago, on December 10th, the world marked the 70th anniversary of the Universal Declaration of Human Rights. This landmark document, which is hailed as a beacon every year by human rights activists struggling for their basic freedoms, was made possible by the work between 1946 and 1948 of illustrious idealists and humanitarians.

They include the Founding Chair the United Nations Commission on Human Rights, Eleanor Roosevelt; her Vice Chair, René Cassin; Charles Malik from Lebanon, PC Cheng from China; John Humphrey from Canada, someone whom I knew a little bit when I was studying law at McGill University in Montreal. These were the idealistic founders of human rights at the United Nations.

Today we meet only a few days after the conclusion of the main annual session of today’s United Nations Human Rights Council, and although it ended by adopting a handful of resolutions on countries that require the world’s attention, the vast majority of the world’s worst abusers of human rights received immunity. They received impunity. Even worse, many of these non-democratic, authoritarian, oppressive regimes actually sit as members on this 47 nation body. It includes countries like China, Cuba, Pakistan, Qatar, Eritrea, Philippines, and the list goes on and on.

So when human rights activists sit there at this Council we have good reason to be depressed. To be pessimistic. To wonder what is the future of human rights today. We’ll hear in a moment for our opening address some thoughts about where we stand today in the world on human rights. But when I arrived here this morning – and for the past couple of days as we’ve been receiving our Human Rights heroes, families of political prisoners – you have a reason, we all have reason today to be inspired.

So while it’s true that at the Human Rights Council for the past six years we had Venezuela sitting as a member of the Human Rights Council even as they beat their people, even as millions have fled, today we’re going to hear very soon from Ambassador Diego Arria, the former Venezuelan Ambassador, the former President of the Security Council. We’re going to hear the real voice of Venezuela, and that gives me hope.

Although Nicaragua today sits in New York on the 19 nation committee that oversees the work of human rights NGOs, very soon we’re going to hear from Felix Maradiaga, one of the leading human rights figures in Nicaragua, someone who has paid the price for standing up for democracy in a country that for the past year has been beating students and protesters and journalists and thousands and thousands are fleeing.

Although Saudi Arabia seems here in Geneva to be a permanent member of the Human Rights Council – that’s not actually in the rules, but every single time there’s an election they get re-elected and every time there’s an election for a women’s rights commission they’re on every single UN women’s rights agency – we’re going to hear from Ensaf Haidar, wife of perhaps the world’s most famous political prisoner, Raif Badawi, the Saudi human rights hero and blogger who called for a free society and was thrown in prison years ago. We’re going to hear from Ensaf his wife and from his three children for the first time coming here – they were at the United Nations yesterday for our opening event – Nagua and Tirad and Miriam. We’ll have reason to be inspired.

Although Burundi was sitting here as a member of the Human Rights Council for the past three years, even though their dictator was recently named the eternal supreme guide, even though he pursues a policy of extrajudicial assassinations and arbitrary detentions, and even though they just arrested a few schoolgirls for the crime of doodling in their book on a picture of the President, well we’re going to hear soon from Ketty Nivvyabandi, an inspiring Burundian poet and democracy activist. She popularized last week to help these girls the hashtag #FreeOurGirls and that hashtag has gone viral – you can all those of you on social media can promote the hashtag #FreeOurGirls.

Although Turkey sits as Vice President of the committee that oversees human rights NGOs in New York, we’re going to hear from Nurcan Baysal, an award-winning Kurdish journalist recently detained by Turkey. We’re going to hear exactly what is happening in a part of Turkey that the world doesn’t know about – that many diplomats fear to even go.

Although in New York at the United Nations Syria sits as Rapporteur of the UN Committee on Decolonization, whose objective is to end the subjugation of peoples, even as Syria has killed perhaps half a million of its own people, we’re going to hear from Abdulaziz Alhamza, someone who was arrested by the Assad regime and by ISIS and is the co-founder of Raqqa Is Being Slaughtered Silently. We’re going to hear from a real Syrian Human Rights voice, someone who really is fighting the subjugation of peoples.

Although China sits as a member of the Human Rights Council and last week when I tried to speak out for Muslims – 1 million Muslims today being detained in so-called re-education camps and China was furiously banging on the table to silence me and the Chair warned me initially, saying “I warn you, you have to stick to the agenda item”, implying that I wasn’t when I was speaking under the issue of discrimination for 1 million Muslims – well we’re going to hear from Dr. Yang Jianli, a former political prisoner and President of Initiatives for China and a survivor of the Tiananmen Square massacre, someone who has spoken out for all regions and peoples in China.

Although Vietnam was a member here of the Human Rights Council we’re going to hear from Nguyen Van Dai, a human rights lawyer who was thrown into prison numerous times – he was just released from prison and he’s come here to share with you what’s happening in Vietnam.

Although the Philippines was just elected to the Human Rights Council, even though we urged the UN not to elect the Philippines, noting that President Duterte is waging a so-called drug war where he is proud of killing people just like that, we’re going to hear from Vincente de Lima, whose sister Senator Lila de Lima dared to speak out against Duterte and was thrown into prison – she’s a political prisoner – and we will hear the truth about what’s happening there.

Although Iran was just elected to the UN Commission on the Status of Women, to their committee that judges women’s rights violations around the world – if you make a complaint but women’s rights violations Iran is now sitting on the committee that’s going to judge that – we’re going to hear from Richard Ratcliffe, whose wife Nazanin Zaghari-Ratcliffe is a political prisoner today in Iran.

Although Yemen was also recently elected as Vice President of one of the UN’s Women’s Rights Commissions, we’re going to hear from Dr. Elham Manea, who was originally from Yemen, a Professor from the University of Zurich who is outspoken for women’s rights in the Middle East. We’re going to hear the truth about that.

Finally we’re going to hear about Tibet – a word that you can’t even mention at the United Nations or you risk being ejected from there – we’re going to hear from Dhondup Wangchen, the courageous Tibetan human rights activist who made a documentary film about what was happening in Tibet, who they threw in prison, they tortured him, he finally escaped and is free and he’s come here for the first time to address our Geneva Summit.

We have assembled here today the moral force – some of the most courageous men and women around the world – and our pledge to them is to listen to their words, to do everything we can to help them, to pressure our own governments. And there’s people watching around the world on webcast on genevasummit.org and our hashtag is #GS19. 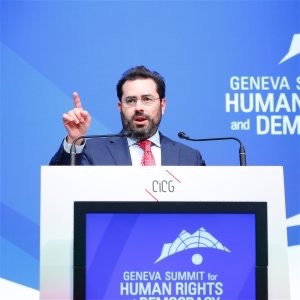 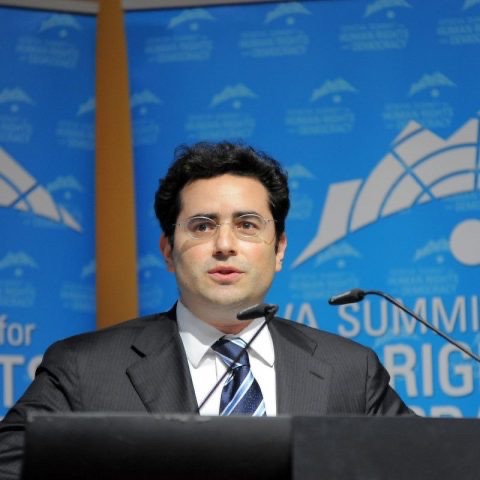 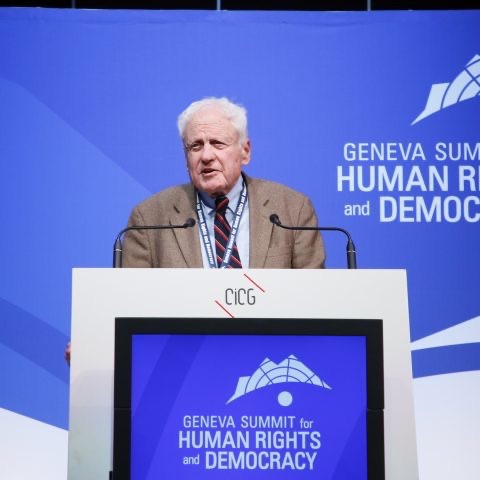 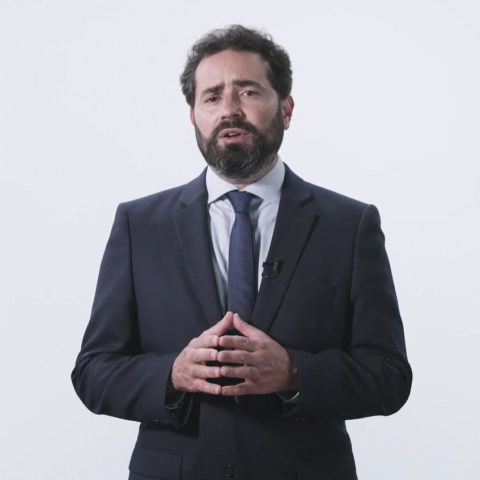 International lawyer, diplomat and Executive Director of UN Watch, Hillel Neuer delivers day one opening and closing remarks at the 13th Annual Geneva Summit for Human Rights and Democracy – see quotes below, followed by full prepared remarks. On the Geneva Summit: “Since 2009, right before the main annual session of 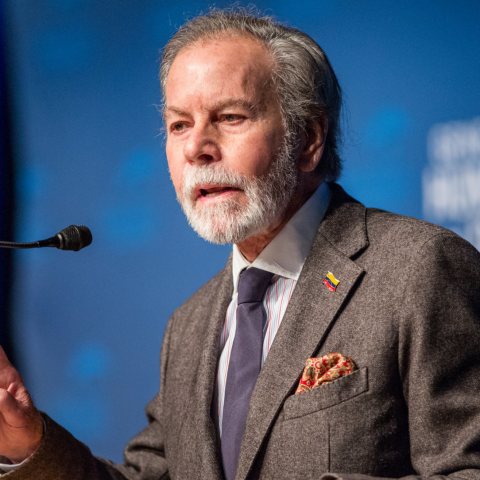 How the United Nations Fails Venezuela with Diego Arria

Diego Arria, Venezuelan politician and diplomat who served as Venezuela’s Permanent Representative to the United Nations (1991–1993) and President of the Security Council (March 1992), addresses the 11th Annual Geneva Summit for Human Rights and Democracy – see quotes below, followed by full prepared remarks. On Venezuela: “Today, Venezuela is a