My Missing Father with Jewher Ilham

Jewher Ilham, rights activist and daughter of Uyghur scholar Ilham Tohti now serving a life-sentence in Chinese prison for working to bridge the gap between the Uyghurs and the Han Chinese, addresses the 12th Annual Geneva Summit for Human Rights and Democracy — see quotes below, followed by full prepared remarks.

On her father’s arrest:

“My father was detained for three days after we shared our last goodbye at the Beijing international airport. He spent the next 11 months under house arrest.”

“Now my father is serving a life sentence and no one has had contact with him since 2017.  I don’t know where my father is and I don’t even know if he is alive.”

“While living as a young girl in China, I experienced the intrusions of State Security into our home, the constant surveillance, the restrictions on schooling, the detainment in the countryside and death threats.”

“The Chinese government has locked up my father to keep him quiet, but we are not locked up. We are free to speak. Through us, his voice cannot be silenced. Through us over one million people detained in camps can be heard.”

“Go. Go. Don’t cry. Don’t let them think Uyghur girls are weak.” These were my father’s last words to me on February 2, 2013 when I left him in a tiny white room at the Beijing airport and boarded a plane to the U.S. We were on our way to Indiana University, where my father was invited as a visiting scholar. I was 18 years old.

At first, I objected. “How could I leave you?  How could I go to the US alone?  I don’t even speak English?”

But, he insisted. “Look around you.  Look at how this country is treating you.  Do you still want to stay here?”

My father, Ilham Tohti, was born in 1969 in Artush, a small town in the Uyghur region known for producing some of the region’s top business people. My father was a successful businessman, an economics professor at Minzhu University in Beijing and a firm believer in equality for all people. He speaks many languages. He’s well-read, a compassionate soul, and a good father.

Prior to his arrest in 2014, he spent most of his time promoting dialogue among ethnic minorities and the Han majority in China. He traveled to many countries, discovering that diverse people can live together in harmony. He wanted this for China.  My father created the website “Uyghurbiz.com” so that Han people could understand the many aspects of Uyghur life — a rich culture, beautiful language, as well as social and economic disparities.

This was all in a good faith effort to counter China state-backed media and school textbooks that portray the Uyghurs as entertainers, pickpockets, thieves and now violent extremists.

My father was detained for three days after we shared our last goodbye at the Beijing international airport. He spent the next 11 months under house arrest.  We spoke at least three times a day, making sure the other was safe and adjusting well to their new circumstances.

At first our conversations focused on the kind of things fathers worry about when their daughter is far away. How was I eating? How was my English coming along? Was I making new friends? He was proud of me even when I did the littlest things.  When I paid my first electricity bill, he admired how grown up I was becoming.  Soon the light talk became more serious.

He warned me that he would probably be arrested a few months before he was taken away on January 15, 2014.  He told me:

“Create Twitter and Facebook accounts. You will need them one day. Daddy has lots of friends all over the world. Some I’ve met. Some I don’t even know. They will help you. Don’t think about this too much now.  Focus on your studies. I want to prepare you for what might come.”

I was born into my father’s world. I had no choice.  While living as a young girl in China, I experienced the intrusions of State Security into our home, the constant surveillance, the restrictions on schooling, the detainment in the countryside and death threats.

In 2013, the choice to leave China was mine. With that choice came the opportunity to keep my father’s work alive. He knew that the Chinese would attempt to silence him by labeling him a separatist and locking him in solitary confinement. Now my father is serving a life sentence and no one has had contact with him since 2017.  I don’t know where my father is and I don’t even know if he is alive. But my father’s wishes for freedom of thought and expression could not be silenced.

Speaking of the coronavirus — the Uyghur region is at high risk for infection with over one million people detained in overcrowded, unhygienic camps. Immune systems are already compromised from poor nutrition and inadequate medical care. The total media blackout in this region makes it difficult to know how many people have been infected and how many have died. Send medical teams and supplies to the Uyghur region to screen, diagnose and treat those inside and outside of the camps. They need you.

Let’s call on China to close the camps and release my father!

On her father being in Chinese prison:

“My father today is in China’s prison because he chose to speak out about essential human rights – the right to think what you want to think.”

On China’s mass oppression of Uyghurs:

“Under the false label of ‘extremism,’ the government has put more than one million Uyghurs into concentration camps.”

“Outside these camps, Uyghurs are monitored and tracked using high-tech surveillance.”

On rights for Uyghurs:

“Speaking up for your people is not separatism.” 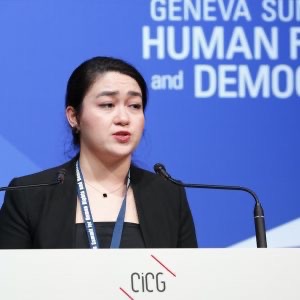 Author, rights activist, and daughter of Uyghur scholar sentenced to life in prison for promoting peace 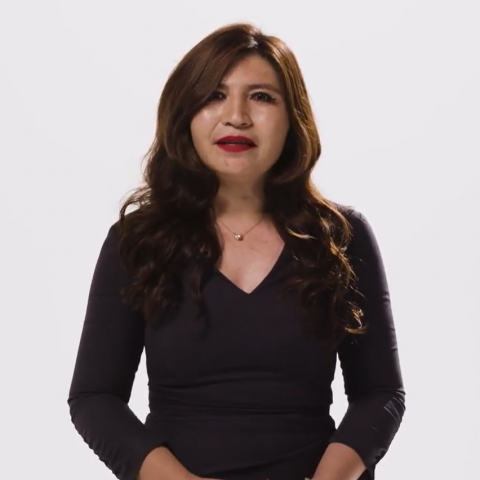 Disappeared by China with Rayhan Asat

Rayhan Asat, Uighur activist and attorney and sister of Ekpar Asat who was abducted by Chinese authorities, addresses the 13th Annual Geneva Summit for Human Rights and Democracy – see quotes below, followed by full prepared remarks. On the disappearance of her brother Epkar: “Unfortunately, [my brother] was born into

Presentation of the 2022 Courage Award with Zumretay Arkin

Chair of the Women’s Committee of the World Uyghur Congress, Zumretay Arkin, presents the 2022 Courage Award at the 14th Annual Geneva Summit for Human Rights and Democracy – see quotes below, followed by full prepared remarks. Introducing Enes Kanter Freedom: “His work, and the work of human rights defenders in this