PrevTrailblazer: Jailed for Showing her Hair with Shaparak Shajarizadeh
Our Responsibility to Political Prisoners with Irwin CotlerNext

On child marriage in Malawi:

“Child marriage is a telling sign of the neglect of human rights in Malawi. It is also a telling sign that women have a devastatingly low status in society.”

“One in three girls get affected by child marriage and are married before the age 18, and one in nine are married by age 15. Some are as young as 10 years old.”

“There are thousands of girls like my sister who have been married off, their rights violated and futures destroyed.”

“Girls who marry young are more likely to be poor and stay poor, perpetuating a cycle of poverty for generations.”

On her sister’s child marriage:

“My little sister was 11 years-old when she got pregnant and was married off to the man who impregnated her. That was it; her childhood robbed from her, her dreams and goals shattered.”

On becoming an activist:

“At age 13, I began to speak out against child marriages and harmful traditions.”

“I started this campaign, I will marry who I want. It became a global campaign.”

“Knowing the pain and trauma of young girls subjected to child marriage, I launched an effort to change the Malawi Constitution to raise the legal marriage age in Malawi from 15 to 18.”

Vision for the future:

“Despite all these legal victories, I believe that preventing child marriage, is about getting girls into schools to stay there.”

“Encouraging girls and women to help themselves raises the living standards for an entire society.”

“No matter how young you are, you have the ability to cause change.”

“An empowered and educated girl becomes an agent of change.”

My name is Memory Banda. I am honored and humbled to be here today, as we continue to promote democracy and defend human rights around the world.

I come from Malawi, a country known across Africa as a model of democracy full of noble people who actively participate in the political process.

At the same time, there are still real developmental challenges for Malawi to overcome. One is the situation of girls and women, who are struggling to reach their full potential.

Despite progress on gender equality, girls and women face discrimination in every aspect of life. Girls are more likely to drop out of school, and women have less access to land, credit, markets and jobs. Furthermore, women are under-represented in politics.

I believe that Malawi will neither be able to evolve nor reach its full potential if half of its population is presented with real obstacles to having social, economic, and political mobility.

Child brides are often exposed to serious health risks, such as premature pregnancy and sexually transmitted infections like HIV and AIDS. Child marriage is also closely linked to low levels of economic development. Girls who marry young are more likely to be poor and stay poor, perpetuating a cycle of poverty for generations.

All of these reasons prove how child marriage is not only a tragedy for young girls in Malawi but also a major obstacle for the country’s development.

In the community I come from, child marriage is equally celebrated just like any other marriage. Child marriage is not considered a human rights violation. Instead, it is viewed as an issue too sensitive and too difficult to confront because it is attached to cultural traditions, beliefs and norms.

But, that is changing. It is changing because we are now seeing girls and women, boys and men, local and national leaders speak out against this harmful practice.

Before I say what more we as a global community can do to end child marriage, let me tell you my story.

My little sister was 11 years-old when she got pregnant and was married off to the man who impregnated her. From that moment, everything changed. That was it; her childhood robbed from her, her dreams and goals shattered.

I have also witnessed my cousins, my family friends, my classmates, the people in my community, all of the girls I grew up with married off. They were taken away from me. There are thousands of girls like my sister who have been married off, their rights violated and futures destroyed.

I had a lot of questions as I was growing up. I asked myself, “why can’t a girl have her own choices? Why should she be a second-class citizen in our own society? Why can’t she just choose on her own?” And, above all, “why can’t this girl speak?”

I remember thinking of the injustice: what happened to my beautiful, intelligent sister, should never happen to anyone. This conviction motivated me to take action.

At age 13, I began to speak out against child marriages and harmful traditions. I started to promote girls’ education, seeing this as the best solution to protect the girls around me, and myself, from abuse and exploitation. I formed a network of my fellow young girls, called the Foundation for Girls Leadership—a non-profit that promotes equal access to rights, equality, and education for women.

Through my work, I have spoken directly to victims of child marriage. They have told me the hardships, the pain, the abuse, and the traumas they have experienced. They have told me what it was like to live with all the pressures of being a child mother. This is not far away from what my little sister experienced.

Knowing the pain and trauma of young girls subjected to child marriage, I launched an effort to change the Malawi Constitution. Along with a coalition of other activists, I called on the government to raise the legal marriage age in Malawi from 15 to 18. After much debate and many challenges, the parliamentarians voted to change the law, raising the legal marriage age to 18 and enshrining it in the Constitution.

But, there was more work to do. The Constitution had many loopholes that made it easy for people to marry off their daughters despite the legal age because of parental consent. So, I launched a youth-led global campaign to pressure the government to again amend the Constitution.

I organized a petition that received one million signatures of Malawian mothers, fathers, and brothers who agreed in saying “I will not marry off my daughter or sister.” This caught the attention of the First Lady of my country who joined our campaign. Ultimately, we even got support from traditional leaders— the custodians of law—who live in the communities where child marriage is most frequent. They helped by writing a letter to the President, urging the government to amend the Constitution.

In February 2017, the amendment passed and now, the Constitution defines any person below age 18 a child, reinforcing the previous law that raised the legal marriage age from 15 to 18.

Despite these legal victories, I believe that preventing child marriage is a multi-faceted project. It’s about getting girls into school and keeping them there. It’s about ensuring they have access to sexual and reproductive health services. It’s about giving girls economic opportunities and proper training. It’s about changing the way families view the problem.

Child and forced marriage is an international problem that needs urgent attention. Ultimately, it’s going to take a massive coalition of voices —including girls, boys, parents, religious and community leaders, politicians and the international community—to speak out against this harmful practice of child marriage.

Prioritizing girls and women is one of the most fundamentally sound methods of changing our world for the better. I have learned that encouraging girls and women to help themselves raises living standards for an entire society. Let’s leave no one behind, an empowered and educated girl, becomes an agent of change.

I firmly believe that it does not matter where one is born; we are all global citizens promised the same rights. And we must join together as one community to protect our fundamental freedoms and to call on world leaders to ensure that we are living in an equal, safe society. 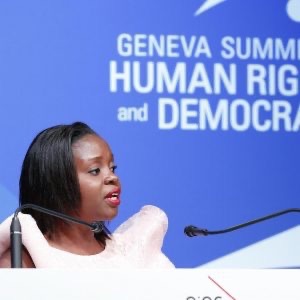 Full Transcript Moderator: I want to ask you, you served as Afghanistan’s youngest female mayor. But what made you run for mayor in the first place? Zarifa Ghafari: Thank you so much. Actually, first of all, I think if you believe in yourself, if you believe you’re doing right, it doesn’t 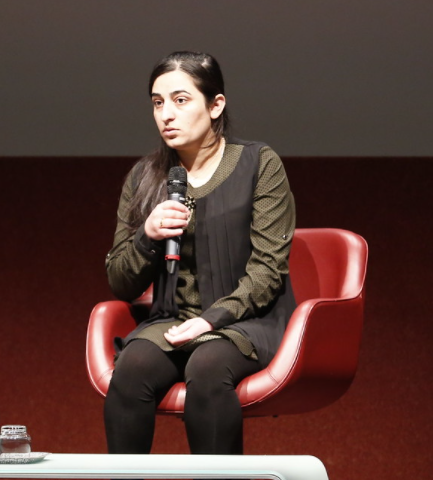 The Girl Who Escaped ISIS with Farida Abbas Khalaf

Full Transcript Moderator: Good day to you all, my name is Jonny Gould. I am British radio and television broadcaster and journalist and today we are going to relate the story of Farida Abbas Khalaf, a Yazidi girl, from a village called Kocho in the Sinjar mountains in northern Iraq.

Annick Cojean, special correspondent at Le Monde and the author of the internationally acclaimed Gaddafi’s Harem, addresses the 6th Annual Geneva Summit for Human Rights and Democracy – see quotes below, followed by full prepared remarks. Quotes: To Be Confirmed Full Remarks To Be Confirmed

PrevTrailblazer: Jailed for Showing her Hair with Shaparak Shajarizadeh
Our Responsibility to Political Prisoners with Irwin CotlerNext