On her father’s arrest:

On being family to a political prisoner:

“We were being followed, we were being threatened, but that wasn’t reason enough for us to shut down, we kept speaking up about my father’s situation.”

“We didn’t know what my dad’s destiny was going to be, we didn’t know if they were going to take him back to prison, we just had no idea what was going on because in Venezuela, the government has no idea about what human rights are.”

On dictatorship in Venezuela:

“I am the voice of all the Venezuelans that have to line up to feed themselves because Chavez and Maduro left a legacy of hatred in my country. They destroyed my country!”

I want to thank the 25 organisations that made this event possible and also, I know that among us we have a lot of Venezuelans; I want you all to stand up because this is a reward that also goes for all of you, because even though you have been away, you’re never absent and you soon will be reunited with your loved ones in Venezuela.

Thank you, for representing us here! Thank you!

My name is Antonietta Ledezma and I am the proud daughter of a political prisoner in Venezuela. My father, Antonio Ledezma, the current mayor of Caracas, the capital. I am grateful to be here, sharing my father’s story, because Antonio Ledezma’s story is a story about repression, a story about injustice and a story of a violation of human rights.

You have no idea what a great opportunity it is for me to be able to speak up about what is going on in Venezuela, about the crisis that we’re being a victim of for 17 years. Because in Venezuela, we feel, and I have personally felt that, it doesn’t matter how loud we yell to the world, what we’re going through, we feel silence, the government controls all the media and we feel desperate and we feel unheard. So, I really want to share with you, how a year ago my life changed forever.

The last 15th of February of 2015, 120 armed policemen smashed into my father’s office. They came without a warrant for his arrest, without letting us know what were they going to do with him, where were they taking him, what were the reasons of his arrest, was this an arrest, was this a kidnap, we didn’t know what was happening; and for the longest seven hours of my whole life, I didn’t know if my father was being tortured, I didn’t even know if my father was alive.

It was until late hours of the night that President Nicolas Maduro came on National TV, saying my father was a conspirator and saying that Antonio Ledezma was planning a coup against the government, something that until today there isn’t even one proof. After this, he was taken right away into the military jail with Leopoldo Lopez. In this jail my mother, my family, my sisters, we were punished for being the daughters and the wife of Antonio Ledezma, we were humiliated because we knew that they wanted to break my father through us, through his family. We were being followed, we were being threatened, but that wasn’t reason enough for us to shut down, we kept speaking up about my father’s situation.

There was one opportunity that after I spoke up about what was going on with my father, and I intended to travel, I was stopped and detained at the airport. A military came to me and when he saw my passport, when he saw my last name, he said that I needed to be detained, because he needed to be sure that I wasn’t carrying any drugs. This also happened to my mother, Mitzy and it keeps happening to our family today.

This, as all of you can imagine, for whoever has a father, a daughter or a loved one, has been a terrible year for myself and for my family. Sometimes I wish to wake up from this nightmare, but thanks to this reality that I am going through, this has triggered a desire of me to change the situation in Venezuela, to go anywhere I have to go, to defend my father’s dignity and to fight for his freedom, no matter where I have to go, no matter how long is this fight going to be, I will not stop.

Last year, due to medical reasons, my father had to have a surgery. A hernia surgery. And for his recovery he was allowed to have house arrest and we thought things were going to get easier a little bit for us, but things only got worse. Today, the government created my home, my house – a prison, a prison because we’re being watched, our conversations are being heard and we’re being followed. Every time I leave or enter my house, they take pictures of me and we’re being heard 24 hours of the day, by the government’s police, the SEBIN.

Last Monday, for the first time in over the year Antonio Ledezma, the mayor of Caracas, has been arrested. He had his first hearing, hearing that was cancelled 10 times throughout the year, and hearing that was supposed to happen 40 days after his arrest. In this hearing, cruelly, the Venezuelan public prosecutor is trying to charge my dad, is trying to give my dad two charges: the first one, conspiracy and the second one, criminal association. These two charges can make my dad end up in jail for 26 years. In this hearing they denied my mother’s entry to the hearing and for six hours we didn’t know what my dad’s destiny was going to be, we didn’t know if they were going to take him back to prison, we just had no idea what was going on because in Venezuela, the government has no idea about what human rights are. The proofs that the prosecutor is showing against my father is the testimony of a military. His name is Arocha. This military was being tortured for eight months, and he testified saying that my father with another political prisoner was trying to plan a coup, and was also trying to murder Leopoldo Lopez. This man was able to escape from his torturers, and is today in the United States, in where he said that these were false allegations, that he was forced to testify against my father and that he has never met my dad in his whole life.

So, only we’re talking here, that the government does not forgive my father Antonio Ledezma, for beating their candidate not only once but twice. My father got a hundred thousand voters and after the president he is again, the candidate that has gotten more voters in the country. We are talking about the only major here in the world that is arbitrary and illegally arrested the way my father is. He is an innocent man. I am not only talking about the politician you might have seen, maybe yes, maybe not in the media. My father is a loving man and he is the bravest man I have ever met.

So, I decided to choose courage over fear, I am here because I am his voice, I am the voice of the other 77 political prisoners in Venezuela, I am the voice of all the Venezuelans that have to line up to feed themselves because Chavez and Maduro, followed by Maduro, left a legacy of hatred in my country. They destroyed my country! I have 24 years, and I haven’t known anything differently from the dictatorship that today we are being victims of in Venezuela.

Today, in Venezuela, from last year we had 28,000 murders by the hands of crime street. So, we are talking about a war, basically we are having a civil war in Venezuela.

I want to share with you some words that my father wrote from prison. This is a segment of a letter he wrote, because this is Antonio Ledezma: “Despite being trapped physically in a cell, my fighting spirit continues to be free. It is free because my conscience tells me that I am serving the right cause. Prison is a unique experience because when you surrender your freedom for a just and noble cause, every second your strength is renewed to keep both your head and your principles high”. 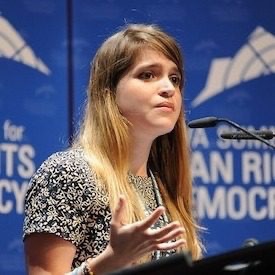 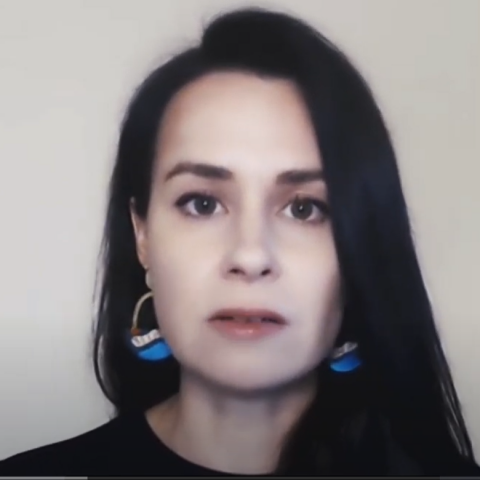 Kylie Moore-Gilbert, Australian-British academic who was just freed after two years in Iranian prison as a victim of hostage diplomacy, addresses the 13th Annual Geneva Summit for Human Rights and Democracy – see quotes below, followed by full prepared remarks. On justice in Iran: “In Iran today, justice itself has 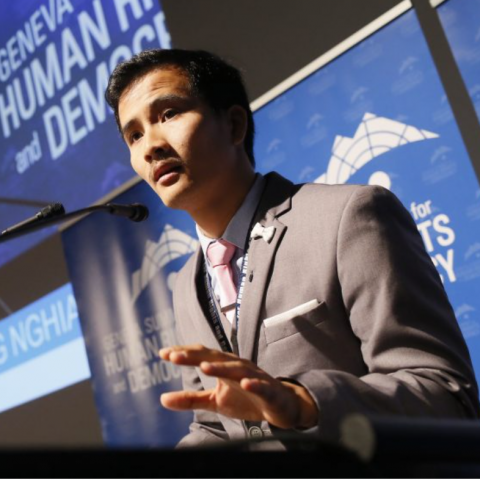 Time’s up for Autocracy with Effy Nguyen 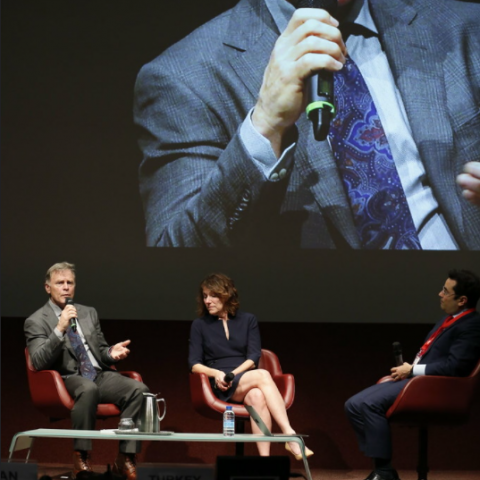 Tortured in North Korea with Fred and Cindy Warmbier