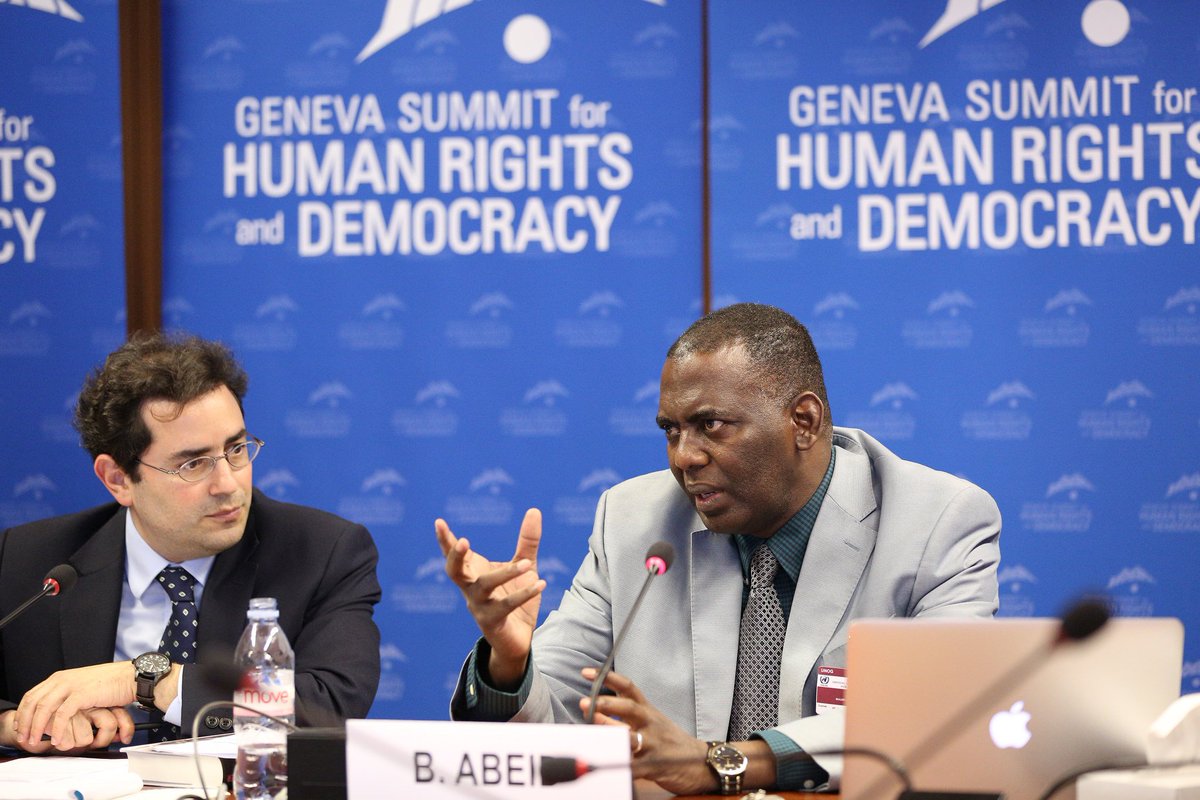 Biram Dah Abeid, leader of the anti-slavery campaign in Mauritania, addresses the 9th Annual Geneva Summit for Human Rights and Democracy – see quotes below, followed by full prepared remarks.
On slavery in Mauritania:
“I, a regular visitor to the hellish and life threatening jails of my country, where on many occasions I was subjected to bullying and banished to the desert, I was born a pariah as an involuntary legacy of my forbears.”

“I am fighting for a Mauritania without outcasts; one which is respectful of its citizens.”

“My father was freed while still in his mother’s womb. . . Later, his first wife and children were sold off. . . Fetuses, children and adults are all caught up in the mores of a system in which children’s identity is passed on through the mothers and they are doomed to be objects.”

“We are imprisoned, ill-treated and beaten. Moreover, we are forbidden to engage in a profession. We are demonized by the government. We are deprived of constitutional rights, like freedom of expression and freedom of association.”

On being imprisoned and tortured:
“On November 11, 2014, I was imprisoned for the third consecutive time as an activist. The cause was my sympathy for a protest march [which] led to my arrest, torture, banishment. I was denied medical care.”

“When I was imprisoned, the cynicism of my jailers led them to listen to, and see, the most grievous attacks against me and my friends. To add insult to injury, my family and loved ones were forced to look on without the right to turn way. . . Since this incident in April 2012, I am being nourished by instinct, the courage of people who in the past have fought and resisted against ignominy”

“Our government over the past decade has distinguished itself through its show of imprisonment of peaceful dissidents because of their commitment to legality and against discrimination.”

“We are looking for a Mauritania that doesn’t exist that will be free of this treatment [slavery].”

“I am working for the self-determination of my black brothers and sisters and I am trying to free their desire for a free life.”

The Islamic Republic of Mauritania has become renowned for the number of slaves in its population, which is a very high number. Our government over the past decade has become renowned for its persecution and torture and imprisoning of peaceful militants, merely because they are fighting for equality and against discrimination based on birth.

On behalf of my comrades and brothers, victims of harassment and cruelty, I address you today. I, a regular visitor to the hellish and life-threatening jails of my country, where on many occasions I was subjected to persecution and bullying and banishment to the desert. I am also a representative of the community of so-called subhumans, the Haratin, whose servile status is enshrined in laws resulting from legal treaties which are abusively protected and taught by virtue of a conservative and unhuman interpretation of Islam.

I was born a pariah as an involuntary legacy of my forebears. The society in which we were born refuses us even the slightest regard or hope. This realisation was the source of my personal revolt. I am fighting for a Mauritania without castes or ostracism, one which is respectful of its citizens; yet this Mauritania cannot be found, it remains an ever-postponed promise.

I promised and pledged to my father to rise up against this inequity. He was the son of a slave and she was forced, my mother, to carry out hard labour. She was sold at auctions like an object and was subjected to corporal punishment. This is the burden of the legacy I cannot annul, it is the fuel that drives my commitment.

My father Dah Abeid was freed while still in his mother’s womb. Later, his first wife and children were deemed to be the property of his master and taken away from him. This example should give you a picture of the law concerning property and commercial transactions applied by my society at the time to human beings; foetuses, children, adults are all caught up in the mores of a system in which a child’s identity is passed on through their mother and they are doomed to be mere objects and live in degradation.

This code has been enshrined in law and is considered holy, protected by the mantle of religion. It is propped up by a government that is a member of UN bodies yet defiantly maintains its racist practices and violent exploitation of mankind despite the Universal Declaration of Human Rights. Mauritania uses the courts and religious schools to spread these shameful practices.

My fight to eradicate slavery and its social consequences and establish the rule of law has been fuelled by my own experience in my childhood of the racial oppression of those in servitude. I saw the spectacle of racial inferiority unfold before my very eyes. It prompted me to question and it impacted my future.

The unofficial racism of the State and of public opinion afflicts many of my fellow citizens. It is stymieing my black countrymen’s right to self-determination and usurping their desire for happiness. After centuries when people have toiled without remuneration and eked out pitiful existences; after decades of festering under the yoke of a military club that has managed to keep the reigns of power to themselves and that dashes our hopes, we remain subjugated, our hope shattered by military coups, plunder and a diplomacy of deceit.

Honourable Assembly, those who practice and profit from tyranny in this way continue to place hurdles in our path as we struggle to obtain basic universal rights. We are imprisoned, ill-treated and beaten. Moreover, we are forbidden to engage in professional activity or earn a livelihood. We are demonised by the government media and the hegemonic tribal system. We are excommunicated from our religious communities and denied our constitutional rights such as freedom of association, assembly, demonstration and expression.

Our organisation, IRA-Mauritania, has been outlawed since its creation in 2008. Our non-violent demonstrations and meetings are considered by the docile judges to be tantamount to armed or non-armed rebellion. For this reason, dozens of our members, both leaders and militants, have been sentenced to up to 15 years of imprisonment after unfounded accusations – later abandoned without written explanation. Some still languish in prison where they serve out their sentences. We have had to endure many a sham trial in our arduous struggle against supremacist pro-slavers. The interchangeable arms of the takfirs, stigmatisation for godlessness and accusations of the crime of apostasy are frequently used against us to incite the hate of our fellow citizens and Muslims.

On November 11th 2014, I was imprisoned for the third consecutive time as an activist. I was detained in the city of Rosso in the southwest of Mauritania by the Commander of the National Gendarmerie, Mohammadu Sid El Min, and by the Regional Director of Police Ahmad Tolba, both of whom were of pro-slavery extraction and members of the dominant ethnic group. The cause of my arrest was my sympathy for a group of 30 people who had marched some 300 kilometres from the city of Boghé to Rosso to demand that the sharecroppers of slave lineage be allowed to enjoy the fruits of their labour.

My solidarity with these demonstrators led to my arrest, torture, and banishment. I was refused medical care and given a two-year prison sentence. My comrades in misfortune and I witnessed how all our efforts were annulled under constraint. We were sent far away from our natural and lawful judges, from our doctors, from our lawyers, and our families.

We are engaged in a Herculean task, facing powers that scorn purposefully enacted national law and the international law that they enacted in sovereignty. In Mauritania, the law promotes might over right. Its sole aim is born of ethnic equality and is to stop and prevent any change in society and preserve the status quo.

Alas, the worst is yet to come. There was a violent campaign by the state media and the mosques were taken over. This led to attacks against me and hateful rhetoric. I was hounded with murderous language, insulted, berated, forced to serve as a guinea pig to an apprentice jihadist. I am still prey to reprisals by the head of state himself, his ministers, his adulators who monopolise the television screens, radio waves and newspapers. When I was imprisoned, the cynicism of my jailors led them to listen to and see the most grievous attacks on me and my friends. Adding insult to injury, my children and loved ones were forced to look on without the right to react or turn away.

Since this symbolic incident of the 27th of April 2012, I am being nourished by instinct, the courage of people who in the past have fought and resisted against ignominy. We hope, at last, despite a dearth of examples in history, that we can win a victory over arbitrary oppression and that dignity will win out over brutality, that we can achieve this peacefully for the common benefit of the oppressed and also their former oppressors. 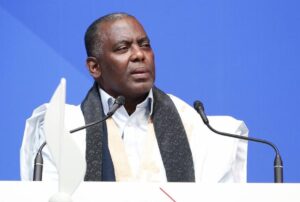 Leader of the fight against slavery in Mauritania 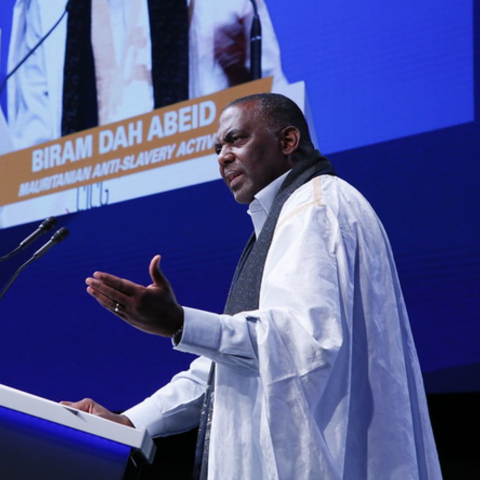 The Abolitionist Who Won’t Be Silenced with Biram Dah Abeid

Biram Dah Abeid, Mauritanian antislavery campaigner and founder of Mauritania’s Initiative for the Resurgence of the Abolitionist Movement (IRA), receives the Courage Award and addresses the 12th Annual Geneva Summit for Human Rights and Democracy — see quotes below, followed by full prepared remarks. On slavery in Mauritania: “Our parents, 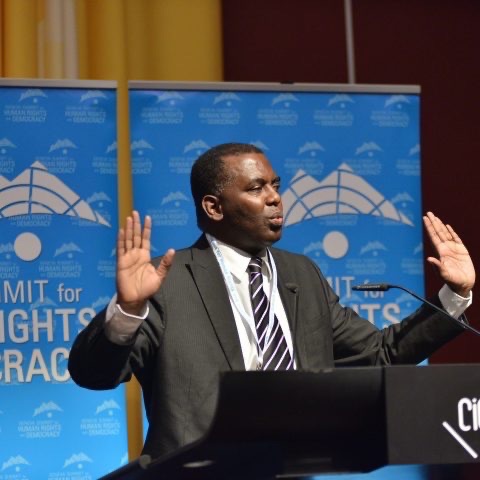 The Battle to End Slavery with Biram Dah Abeid

Biram Dah Abeid, “the Nelson Mandela of Mauritania,” founder of the Initiative for the Resurgence of the Abolitionist Movement (IRA) and an antislavery campaigner, addresses the 6th Annual Geneva Summit for Human Rights and Democracy – see below for full prepared remarks.   Full Remarks   Biram Dah Abeid: I thank you, dear 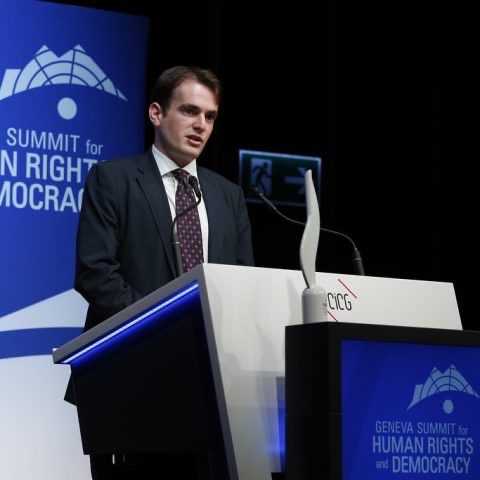 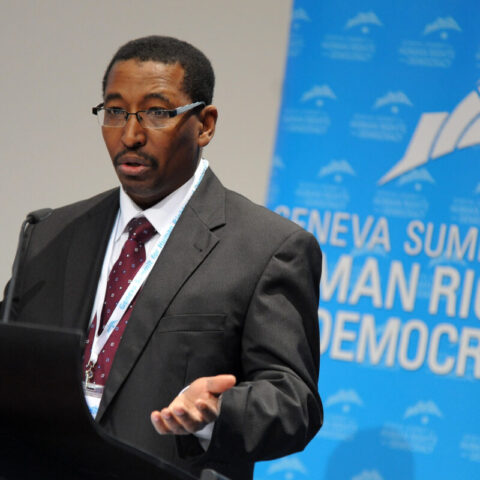 Crimes Against Humanity: Slavery, Genocide and Concentration Camps – In Our Own Time? with Abidine Merzough

Abidine Merzough, Mauritanian activist and European Coordinator of the Initiative for the Resurgence of the Abolitionist Movement, addresses the 5th Annual Geneva Summit for Human Rights and Democracy – see below for full prepared remarks.   Full remarks   Abidine Merzough: Ladies and gentlemen, I am happy to be able to inform