From the Democracy Wall to Tiananmen Square with Ren Wanding 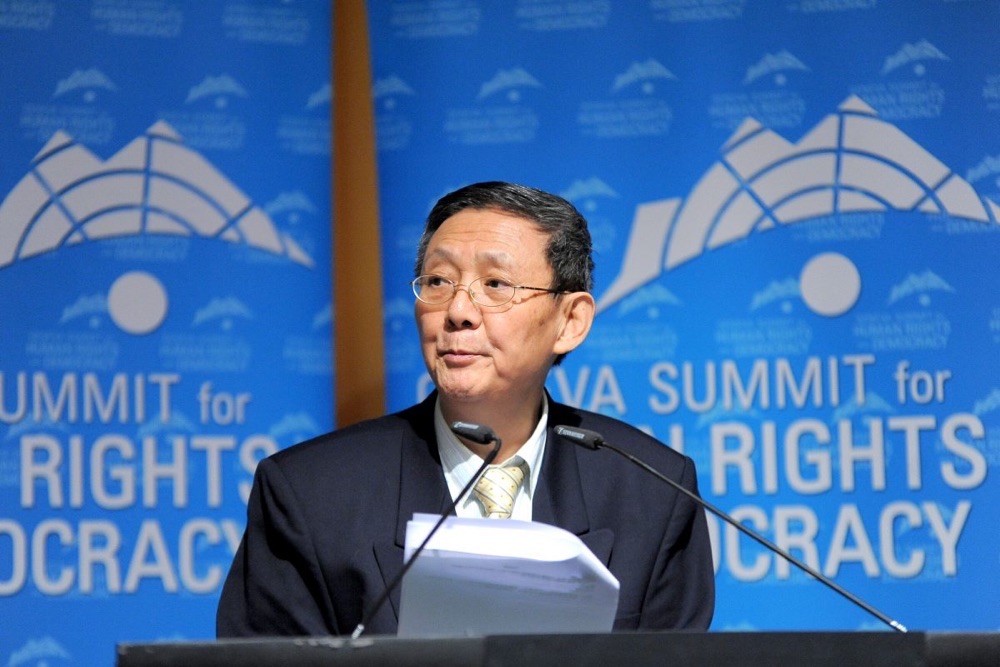 Ren Wanding: In 1989, I drafted [a] human rights declaration of China and I founded the China human rights coalition. I participated in the Tiananmen Square protest in 1989 and was imprisoned twice for [a] total [of] 11 years. After [I was] released, I continued working on human rights and won the Robert Kennedy Human Rights Award in 1989. Two weeks ago, an initiative for China, had begun a project of report[ing] human rights in China to the United Nations. [The] United Nations should condemn [and] stop human rights violation[s] in China. According to UN rules, China’s term on [the] UNHRC should be ended this year. will have to wait for a year for its eligibility for re-election. That in the end of 2013, China’s term on UNHRC will be reconsidered at the end of 2013. We hope that the international community realizes the importance of this moment and jointly stop[s] the human rights violation[s] in China.

It has been 100 years [since] the imperialist dynasty was overturned by the democratic revolution in China in 1911. However, it [was] restored later. The Chinese people continued striving for democracy. The liberal predecessor faced brutal persecution. In 1957, the youth democratic movement of a democracy war was devoted to the UN belief of a human rights revolution and advocated for human rights democracy. Ten years later, in 1989, [at the] Tiananmen Square protest, we enjoyed the fruit of weakening our citizen contemporary human rights and democracy mood in China; our sturdy, mature, bright and glorious.

The Arab Spring from 2011 has deeply influenced the Chinese people, and it taught us the new ways of networking and association. Chinese people, especially the youth from 18 to 35, are longing for [a] civilized and free social society, and criticize the brutality and unfairness of the Chinese government. Since the Arab spring, more than 20 Chinese people were arrested and sentenced. Thousands of people’s houses were searched and property confiscated. Nearly 200 people’s freedom was restricted. Numerous people were beaten. This suggests [that] we know the actual number of men [is] well beyond this.

The right to vote freely is the representation of a modern civilization. However, the elections for county and the township level representatives of the peoples of congress are widely illegal. For example, for the elections of Beijing and the Changzhou Jiangsu representative staff of a local neighborhood committee, require voters [to] only vote for community party members. This is widespread and it reveals the deceptiveness of the elections for the representatives of a people’s congress. The blind civil rights activist, Chen Guangcheng, has been under house arrest for one and a half year[s] since [his release] from prison. During the Chinese New Year, more than 200 people were sent to guard him. The road outside Chens’s house was blocked by cars and villagers [could] only make a detour. Chen cannot even receive a timeless treatment for his feeble health. Chen and his family’s basic human rights of personal freedom, health care, and the security [were] deprived by the Chinese authorities. During the process of supporting and visiting females, blind civil rights activist Chen Guangcheng Chinese, citizens furthermore integrate civil powers and cultivate citizen consciousness, train them in social practices and realize a civil movement should be low-cost, low risk and interesting and sustainable. A word of a conscience of China was founded by human rights activists from Beijing [inaudible name]; it claims that democracy, freedom, human rights and constitutionalism will be the highest laws for China today and in the future.

There was no internet of freedom when I was in China. My mailbox was monitored, precisely attacked, pre-optically blocked when necessary and deleted during sensitive moments. My computer and cell phone outsider were also harassed. Today, many Chinese people face this situation. Chinese Government’s illegal monitor[ing] of [the] internet should be severely condemned.

The judicial system in China not only represses us, but also forces the people to make concessions. The developments in today’s Chinese society were achieved by our blood and the tears, imprisonment and the sufferings. In China, the economy develops market properties, living standards improve, cultural investment increases. However, the decayed social system, ossification of politics, power capital combinations of social and fairness and human rights violations are widely existent. The system’s legal rights to vote were widely abused, forced birth control and abortions, illegal forced demolition and evictions, black jails, illegally housed confinement by police, illegal house search and confiscation, punishment by association, black jails. And the citizens’ personal security was severely threatened; extorted confessions, physical abuse, insult, cruel torture, judge[ments] based on insufficient evidence and [im]properly applying laws, violating legal procedure, using severe charges – such as charging religious believers and dissidents, ethnic minorities, and human rights activists as inciting subversion of state power – are widely spread. The situation in Tibet is very critical. 26 self-immolated cases had taken place in less than three years. This book was edited by Dr. Jianli.

China ranked 1774th in the world press freedom index in 2011. Last year there was a clear regression for the freedom of press in China. At least 34 journalists were imprisoned for inciting subversion of the state power or conspiring to subvert China’s state power. 16 journalists got fired. The international society lacks a basic pressure on China for the human rights situation. This results in the sufferings of many human rights activists in prison. Human rights movement[s] for China, initiative of China, strongly request the Chinese authority to release these prisoners of conscience and protect their li[ves], and improve their medical treatment, enhance their diet[ary] standards. The least that are privately here [inaudible names] since 1949. China’s democra[tic] power from civil society continuously fights against the authoritarian government. Millions of Chinese citizens still fight on the front line[s] for human rights and democracy; they are the model and the [pride] of our generation. I work with my colleague, Dr Yan Jianli, and the people to promote citizen power and a continued development of [a] human rights and democracy movement in China and abroad. 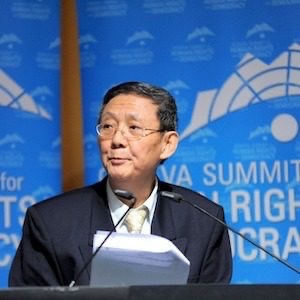 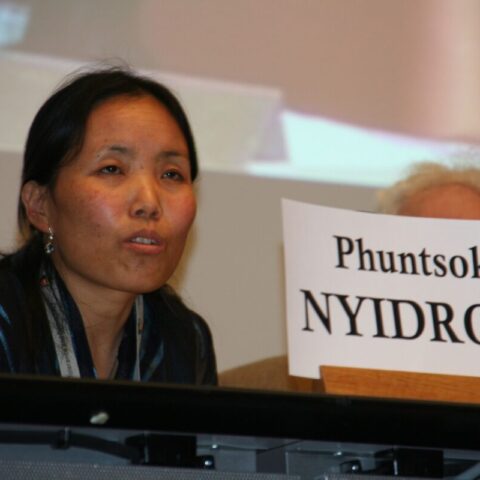 Phuntsok Nyidron, one of Tibet’s longest held political prisoners, addresses the 2nd Annual Geneva Summit for Human Rights and Democracy – see below for full prepared remarks.   Full remarks   Phuntsok Nyidron: Good morning everybody.  My name is Phuntsok Nyidron. I was born in Phenpo, a small village near Lhasa, the capital 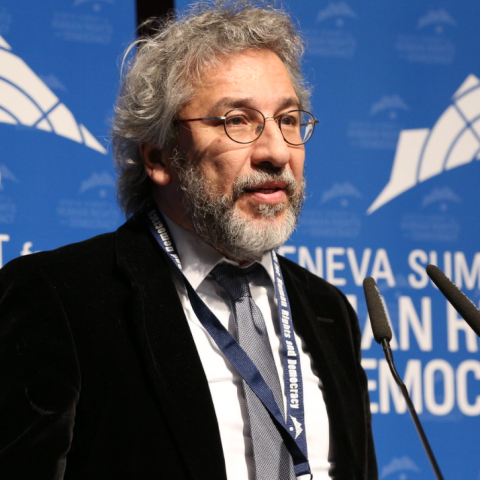 The Battle for a Free Turkey with Can Dündar

Can Dündar, a Turkish journalist jailed and exiled for his reporting, addresses the 9th Annual Geneva Summit for Human Rights and Democracy – see quotes below, followed by full prepared remarks. On the family of human rights activists:  “We are in a big family of freedom fighters from all over the world here, 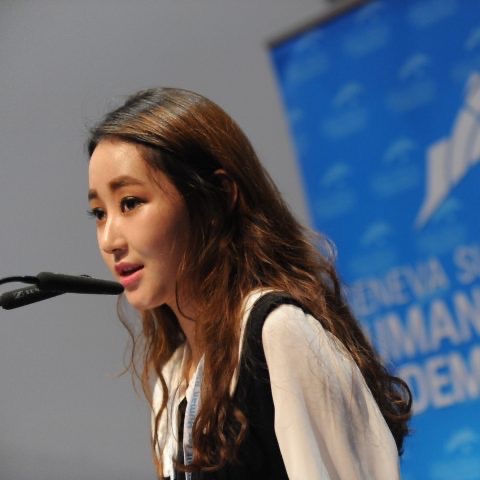 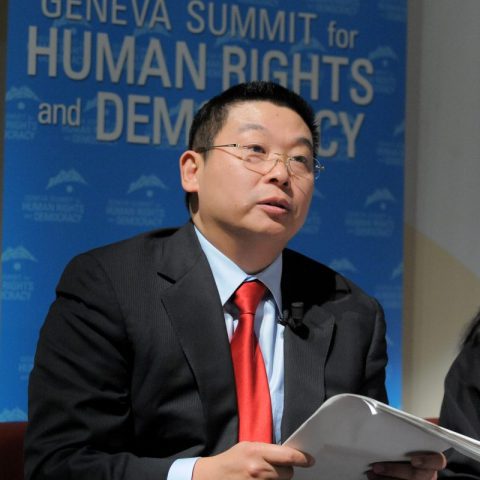 The Situation of Human Rights in China with Yang Jianli