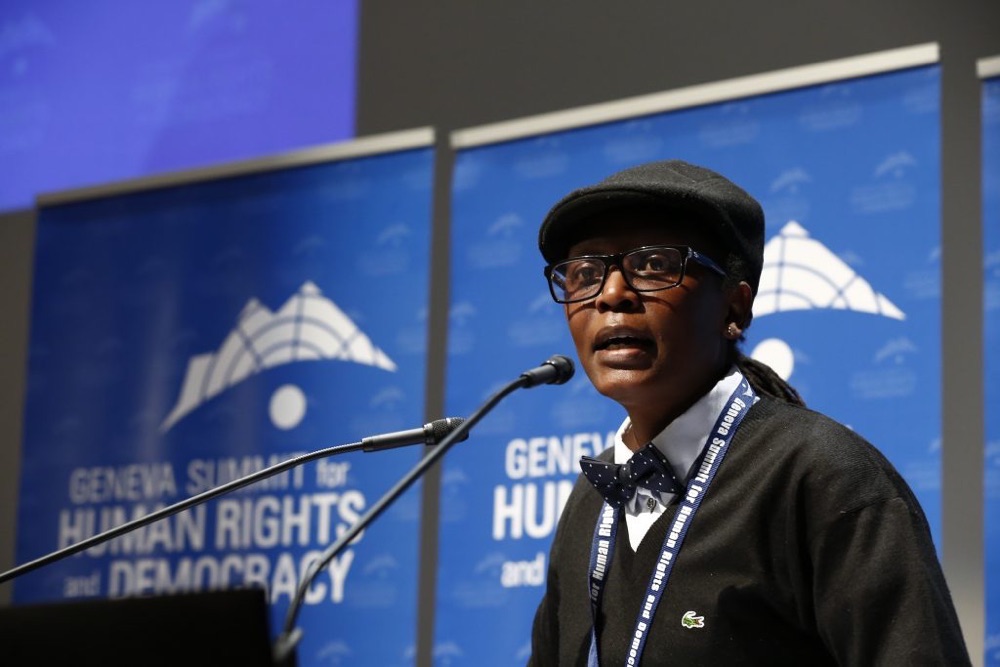 On being openly gay in Uganda:

“Our struggle needs a face because we want people to know they’re not alone in the villages when they’re told that they’re possessed by demons.”

“My parents, especially my mother, begged the principal not to expel me because she said my ‘sickness’ had no cure and they should have mercy on me since I was about to sit for my final years exams. My mother’s words hurt me that day.”

“We started underground because many people were in the closet and we had to protect their identities… By now our social places had been exposed in the media and so people would wait for us in the night and attack us.”

On being a human rights activist:

“It gives me courage to say that I’ve inspired many other activists to speak out.”

“My life has become a roller coaster from being evicted from houses, to physical attacks, to rescuing people who have been arrested… to burying some of my colleagues who have been denied medical attention, or murdered, or committed suicide…”

Message for the international community:

“Today I want to say – keep our governments accountable, follow our social media so you can get engaged and informed. You cannot be free if all other people are not free.”

Growing up in one of the most beautiful countries on earth as an open lesbian was both fun and difficult. Fun in a way that I got so many hook ups without much try since I was one of the very few open ones. This though also caused me a lot of trouble. But one would ask why would anyone be so open about their homosexuality in a country like Uganda. Well for starters I didnt know it was illegal to be gay, secondly I didnt even know that one had to “come out” because the subject was just taboo. Topics like homosexuality were never discussed at home nor at school.

My openness caused me a lot of trouble from being caned at school assembly to being expelled from so many schools until university. The first time I heard of the word lesbian I was 8yrs in primary 3 when my class teacher told me I would be “chased” out of Uganda. This worried me so much because I could not imagine where I would go without my family, but I didnt pay much attention to the meaning of the word until I was in my first year at secondary school. I was always being called into the headmistress’s office because of the love letters I used to write to fellow girls which on many occasions led to fights among them. You know when I was growing up I was so beautiful and all my schools had so many beautiful girls so it was difficult for me to choose only one. This led me to so many suspensions and expulsions from many schools. My parents kept transferring me to different school and telling my schools that I would out grow it. But my days to transfer schools were to come to a sudden end when I was suspended from university in my final year and faced expulsion because of my sexual identity. Now the teachers beatings from my primary and secondary school days had turned into much more serious physical and sexual threats. This led the principal of my university to call my parents and make me sign a memorandum of understanding that I would never go in a 100m distance from the girls hostels and to report every day to show that I am not dressed like a “boy”.

The university also put me off the agenda of the Freshmen dissertation week where they warned all freshmen not to associate with me least they get expelled. At this time, my parents, esp my mother, begged the principal not to expel me because she said my “sickness” had no cure and they should have mercy on me since I was about to sit for my final years exams. My mother’s words hurt me that day but I didnt really know what they would mean in years to come. She was trying to save my education and had to say what the university wanted to hear.

This is when I started to become interested in what my sexuality really meant. So I began to do research about why I was being bullied and expelled simply because I was in love with girls. Remember now I am a university student and I still dont understand why my sexuality is such a big deal. The results were a shock. I discovered that it was ILLEGAL to be gay – not only in Uganda, but also in africa and in many other parts of the world. This left me utterly shocked, confused and honestly outraged. This is what propelled me into political activism. During my school days I had already been socially active because I made so many parties where I invited many people who identified like me in secret. Now I was done with just socializing, I wanted to find out more about why it was illegal for same sex people to exist.

This led to the formation of my organisation in 2003 – Freeedom and Roam Uganda. With no experience of the NGO world but with a lot of research from the then new internet in Uganda I together with 2 other friends started what today is the oldest organisation in Uganda fighting for the rights of LGBTI people.

We started underground because many people were in the closet and we had to protect their identities. My mother assisted us with her home office and internet since internet cafes were very expensive but even more than that, they were not safe. By now our social places had been exposed in the media and so people would wait for us in the night and attack us. This made so many of my friends reject the idea of an organisation and some even stopped coming to the pub where we used to meet to hook up, smoke, play pool. It also caused some relationship fights. But then we experienced a turning point when 6months after the formation of our organisation on december 8th the country woke up to news of a teenage student suicide in one of the government girls schools because the parents and teachers had caned her at school assembly due to rumors that she was a lesbian. The girl – Paula – decided to end her life in her dormitory out of embarrassment and shame. It reminded me of the same canes to which I was subjected at school assembly when I was growing up. This was the end of our underground work. Just 6months into political activism we introduced ourselves to the country and condemned the events that surrounded Paula’s tragic death.

Since then My life has become a roller coaster from being evicted from houses, to physical attacks, to rescuing people who have been arrested to traveling the world to tell the stories of so many Uganda lgbt people, to lobbying governments to burying some of my colleagues who have been denied medical attention, or murdered, or committed suicide, to helping the homeless.

Standing here today to tell my story is one of the things I have been doing for the last 18yrs since I started this work. Sharing our challenges as members of the LGBT community living in very conservative and hostile countries like Uganda. Nevertheless we have also registered a number of successes over the years even if the struggle is still far from over.

But I take this opportunity of addressing you all today to make one major call for support. You have the ability and the resources to support so many social justice movements around the round through proposing resolutions, requesting country visits and sharing resources. I ask you to use your resources to hold Governments accountable. Uphold the Universal Declaration, impose sanctions to end this war.

Learn about other social justice movements, follow our social media, and be informed so that you will know how best to do good instead of harm.

Don’t be selective in what you fight for. Fight against all injustices. 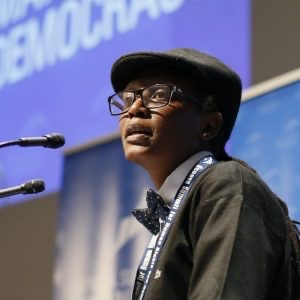 How To Topple A Dictator with Bobi Wine

Ugandan pop-star turned 2021 presidential candidate and opposition leader, Bobi Wine, speaks at the 14th Annual Geneva Summit for Human Rights and Democracy – see quotes below, followed by full prepared remarks. On deciding to speak out: “My fame wouldn’t change the reality – that I was just a boy from