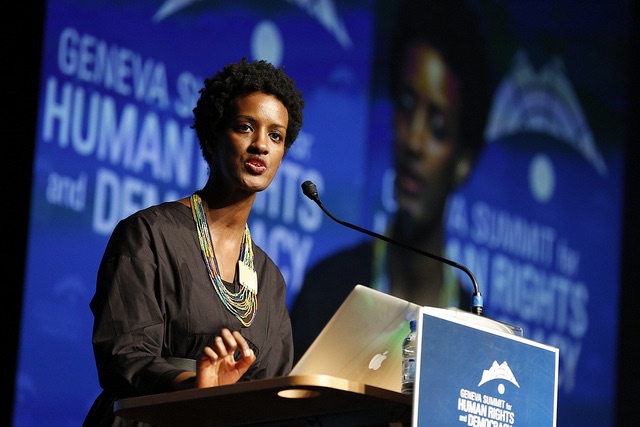 Ketty Nivyabandi, human rights defender who was forced to flee her home in Burundi in May 2015 after leading a peaceful protest, addresses the 11th Annual Geneva Summit for Human Rights and Democracy – see quotes below, followed by full prepared remarks.

“Today I am a refugee because challenging the regime in Burundi is equivalent to a death sentence.”

“Our security forces have free reign to arrest anyone they see.”

Call to the international community:

“We cannot dismantle oppressive regimes unless we analyze the complex networks which feed and sustain them…  So I am here to mobilize you for action.”

“We cannot afford to let dictators bully us into absolute disregard for human rights.”

“None of us is free unless all of us are free.”

“As we say in my beautiful language Kirundi. ‘However long the night, the sun always comes out in the morning.'”

I would like to talk to you about one of the most severe democratic crisis in the world today, about how democracy collapses and dictatorship rises under our very eyes, sometimes overnight, and most importantly what we can and must do about it.

In 2015, as many of you are aware, our president made the irresponsible decision to run for an unconstitutional term in office, a completely unlawful move which has thrown our country into absolute chaos. The country instantly broke into peaceful protests, which the police responded to with bullets and brutal, disproportionate force.

Democracy died on April 26 with Komezamahoro, a 15-year-old boy scout who was shot dead by the police as he stepped outside to watch the protests.

Since then, the repression has taken barbarian proportions. Nkurunziza’s regime has killed, raped, abducted, tortured, and used the most unimaginable crimes to crush dissenting voices, democracy and rule of law.

I took active part in the protests, by mobilizing women to come out and speak up against the violent repression. We protested peacefully but fearlessly, as we called on the president to uphold rule of law. We reminded him that to be president of the republic means to be at the service of the people and not the other way around.

Instead we were brutally repressed, as was anyone who dared speak up against the third term

Today I am a refugee, because challenging the regime in Burundi is equivalent to a death sentence. Many of the incredibly brave women who marched with me have since been abducted, raped or murdered, most have fled and are scattered in refugee camps in East Africa while the rest remain tight-lipped in Burundi, keeping the lowest possible profile to survive.

Half a million people, many of them women and children sought refuge into neighboring countries, leaving their meager means and plots of land behind.

Since then, my beloved country Burundi has become a lawless dictatorship where one must conform and self-censor in order to survive. On the surface, things look calm, but calm and freedom are two completely different things. The regime has become more sophisticated in its repression: one the new tactics of the regime is torture and enforced disappearance: people are captured in public spaces, taken in police or national intelligence vehicles, never to be seen again. And the population is too terrified to say a word. They keep quiet to stay alive.

In modern dictatorships, people go to work, attend weddings, they even go to the beach. But no one is free. There is no freedom of expression, no free press, no free civil society, the judiciary executes the orders of the executive, and the legislative largely made up of the ruling party, as most of the opposition is exiled.

The national intelligence services, the national police and presidential guard have free license to arrest anyone for any reason. Today, three school girls aged 15, 16 and 17 are in jail for allegedly scribbling over the president’s photograph in their school manuals. They face up to five years in prison. This is the kind of regime we are faced with.

APRODH, a leading human rights organization, has documented 2189 targeted killings since the start of the crisis. SOS Torture, another organization, has a record of 5579 arbitrary arrests, and 103 people tortured in 2018 alone. Ndondeza is a campaign for disappeared people. It has 117 fully documented cases to date, and hundreds more to investigate. These numbers are only the tip of the iceberg, as no human rights organization is currently allowed in the country. I shiver at the thought of what we will uncover once the entire truth comes out about the past 4 years.

Meanwhile the regime continues to escape justice: it completely denies these violations, has pulled out of the ICC, refused to allow the UN Commission of Inquiry into the country, has shut down the UN Office for Human Rights, and refuses to participate in peace talks.

For the past four years, my colleagues from civil society have toured the world advocating for the rights of our people. We are tired of raising awareness if the awareness does not yield any action. At some point we need to ask harder questions. Why is there such silence on the plight of Burundians today? Who profits from the abuse of power in Burundi?

I am here to mobilize you for action. The people of Burundi called for change, resisted oppression by peaceful means, and have been crushed, decimated, before the eyes of the world. They are losing hope and choosing to conform with dictatorship, for their and the safety of their loved ones. Others have given up on peaceful protests, and today they are taking up arms to make their demands heard.

This is what dictatorship does, not only does it crush your self-confidence as a people, it also breeds armed conflict. Impunity breeds impunity. Oppressions breeds oppression.

The deep trauma and pain that Burundians have endured over the past four years will take decades, perhaps generations to heal, all this because of one man’s obscene hunger for power. Worse, this trauma adds to decades of previous impunity in our country. Nkurunziza, our oppressor today, is himself is a victim of oppression. The rebellion he led was meant to liberate the country from past injustices. But as is the case with most armed liberations, power became too irresistible to let go of.

This is the vicious cycle that we must break.

It’s what made me risk my life in the streets, and what made so may women march too: beyond the immediate urgency of the moment, in our infinite feminine wisdom, we also knew that if we did not stop this regime in its tracks, we would be raising a generation with no hope. A generation that does not believe justice is worth standing up for, a generation crippled with fear and repressed frustration, which is the ultimate recipe for violence. In other words, by failing to address the Nkurunziza problem today, we are planting the seeds for new Nkurunzizas to grow tomorrow.

Our struggle for true freedom continues and we shall overcome. But we also need you, the people of the world, to stand by us. Burundians need your solidarity, and we all need each other.  One thing that’s been obvious, sharing experiences with others here, is that our oppressors use the same playbook. They also support each other and share tactics. And for us to transform our societies, those of us who dream of freedom, justice and true peace need to support each other too. We cannot afford to let dictators—who are growing more defiant and more organized than ever globall—bully us into absolute disregard for human rights and dignity. Together we must keep rising, with steely hope and the firm belief that another way is possible, and we must spread that belief around us, through solidarity and robust action.

I urge you all to support our people and support all oppressed people around the world today. It only takes one candle to break the darkness, and each of us is a candle. You can all start by tweeting with the #FreeOurGirls hashtag, and urge your governments and those around you to call for the release of our 3 young girls. That’s one action you can do right now, today. And that’s how change begins, one action at a time. 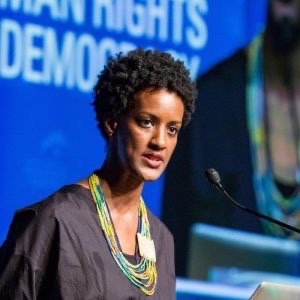 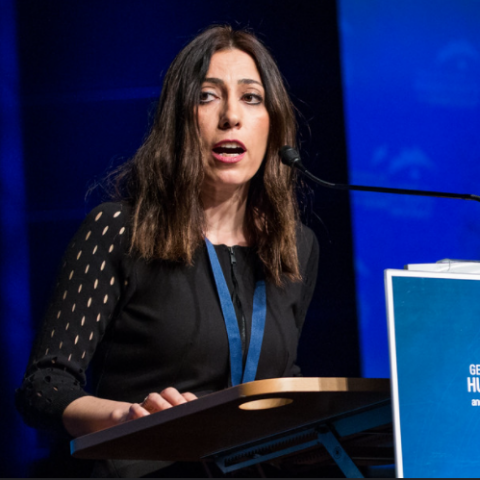 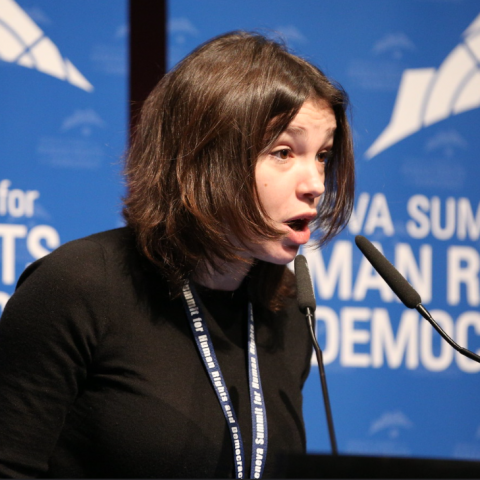 “Russia will be without Putin” with Zhanna Nemtsova

Zhanna Nemtsova, Russian activist and daughter of murdered opposition leader Boris Nemtsov, addresses the 9th Annual Geneva Summit for Human Rights and Democracy – see quotes below, followed by full prepared remarks. On a resurgent Russian authoritarianism: “The title of the panel, as you know, is “The Return of Authoritarianism”, and 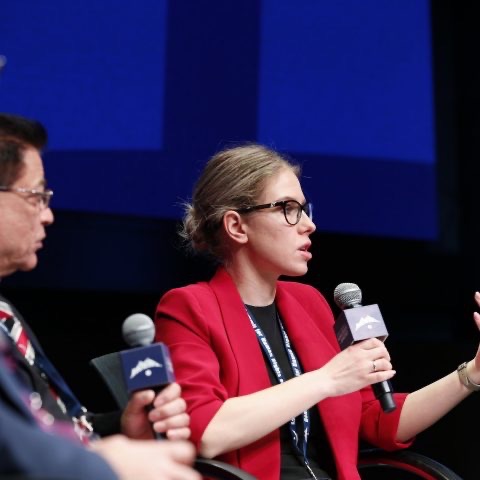 Rights in Russia with Lyubov Sobol

Lyubov Sobol, Russian lawyer, anti-corruption activist and leader of the pro-democracy movement, addresses the 12th Annual Geneva Summit for Human Rights and Democracy — see quotes below, followed by full prepared remarks. On her election candidacy: “This past summer I ran for election in the Moscow City Duma.” “Independent, democratically