How to Build a Safer World with Michael Levitt 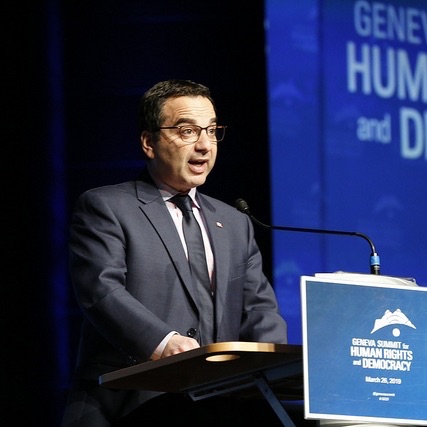 On the need for advocacy:

“Unfortunately, we are seeing a resurgence of gross human rights violations around the word…And the response to these atrocities, to great shame, has been much too little, much too late, especially in the halls of the United Nations.”

“There are costs for standing up for our principles, but the cost of abdicating our responsibility would be much greater.”

“By promoting human rights, by addressing abuses and advocating for accountability, we work not only to improve the conditions of those suffering, but to our own benefit in building a safer, more stable and prosperous world.”

“The most egregious abusers hate to be in the spotlight.”

Good morning everyone, bonjour a tous. I want to begin by thanking Hillel Neuer and all the staff and volunteers involved in the organization of the Geneva Summit. It is more critical now than ever.

My name is Michael Levitt.

I’m a Member of Parliament in the House of Commons of Canada, and chair of its Standing Committee on Foreign Affairs and International Development. Prior to that role, I served as Chair of that Committee’s Subcommittee on International Human Rights. In both roles, human rights are front and center in everything we do.

Just three months ago, we celebrated the 70th anniversary of the Universal Declaration of Human Rights. After the horrors of the second world war, which impacted peoples from every corner of the globe, the declaration responded to the need to maintain international peace and stability through a framework of principles and standards.

Fundamental to that declaration is that human rights are universal rights. There are no eastern or western rights, only the fundamental rights and freedoms that every person, regardless of race, religion, creed, or background is equally entitled to.

No matter where we’re from, be it Canada, Switzerland, Nicaragua, or Vietnam, whatever our different backgrounds, we all have the same aspirations for the rights and freedoms that far too few of us are privileged to enjoy.

Unfortunately, we are seeing a resurgence of gross human rights violations around the world. There are the most obvious cases of arbitrary arrests, torture, and executions, of state-sanctioned discrimination based on gender or sexuality or religion or political beliefs or any number of factors.

There is the criminalization of political dissent and peaceful assembly, where tragic examples in places like Burundi and Turkey, come directly to mind. In the case of Syria, the Assad regime’s sheer brutality, gassing its own citizens, has been made possible by the support of Syria’s allies: Russia and Iran. This is not simply a single government murdering its citizens, it has help from other countries eager to undermine the international rules-based order and the rights framework that underpins it. The case of Syria has been the biggest human rights catastrophe in the world, in decades. Millions displaced, hundreds of thousands dead, obvious war crimes and crimes against humanity taking place.

And the response to these atrocities, to great shame, has been much too little, much too late, especially in the halls of the United Nations.

We have a moral obligation to confront abuses, not ignore them. Now there is no country that has a perfect record or history. My own country has had shameful moments in our history that we are still recognizing and reconciling, not least of all our mistreatment of indigenous peoples.

I am proud of Canada’s efforts, under Prime Minister Justin Trudeau’s leadership and the bold work of our Foreign Minister Chrystia Freeland, to call out abuses and support the most vulnerable among us.

To take a very visible example, Canada has stood steadfast in calling for the release of Raif and Samar Badawi and other human rights defenders, especially women’s rights defenders, in Saudi Arabia.  Seeing Raif’s family here with us today is inspirational to continuing the fight until he and the others are freed.

There are costs for standing up for our principles, but the cost of abdicating our responsibility would be much greater.

In the case of the Lima Group, we’ve seen a group of countries from across the Americas that has been vocal, active, and effective in standing up for the rights of Venezuelans who have suffered greatly under the cruel and repressive Maduro regime.

In the case of Syria, Canada has been clear and principled in its condemnation of the Assad regime and its Iranian and Russian enablers.

We’ve proudly welcomed the most vulnerable Syrian refugees to our country. We’ve created special immigration programs to help Yazidis who survived the genocide find safety and a new home in Canada. And we are continuing to help Kurdish and allied forces combat and defeat the scourge of ISIS.

In Turkey, we have and must continue to call out the Erdogan government’s arbitrary arrest and detention of thousands of men, women, and children, and the crackdown on Kurdish communities, including the arrest of democratically elected leaders.

The attempted coup of 2016 does not excuse a reactionary violation of human rights and fundamental freedoms. Journalists, academics, students, LGBTQ and women’s rights defenders are all under constant threat of arrest or worse.

In the case of Burundi, I’m proud of the work of our Subcommittee on International Human Rights. We studied the crisis and crackdown by Pierre Nkurunziza’s government three years ago, but we have sadly only seen the situation deteriorate further. Repression and the denial of rights including the arrest of children for doodling in a textbook, continue to escalate.

These issues must not be glossed over and cannot be ignored. Behind every speech and statement are real people undergoing real suffering. By promoting human rights, by addressing abuses and advocating for accountability, we work not only to improve the conditions of those suffering, but to our own benefit in building a safer, more stable and prosperous world.

We cannot abandon that advocacy and abdicate these ideals to those who would rather we talk about anything else. The most egregious abusers hate to be in the spotlight and that is one of our greatest obstacles. Here, we are giving voice to the voiceless.

As we gather here today to listen to the voices of the human rights defenders who every day stand up for the rights and freedoms that many can only dream of, we must bear that in mind.

We should be forever grateful for these defenders and their forebears’ work, and never stop supporting them. 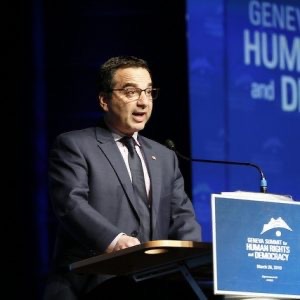 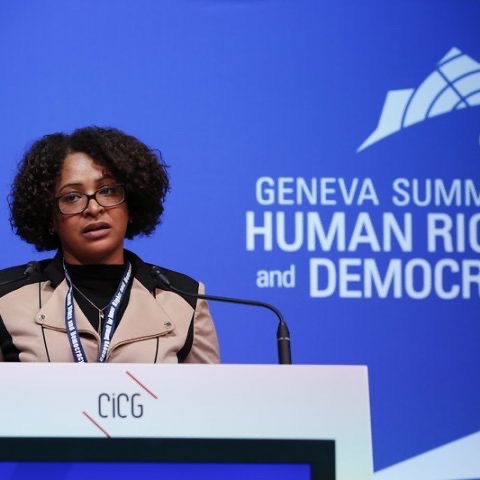 Taking on the Cuban Regime with Laritza Diversent

Laritza Diversent, Cuban lawyer, journalist, and human rights defender who serves as Executive Director of the nonprofit Cubalex, addresses the 12th Annual Geneva Summit for Human Rights and Democracy — see quotes below, followed by full prepared remarks. On lack of democracy in Cuba: “The judiciary does not exist.” “The 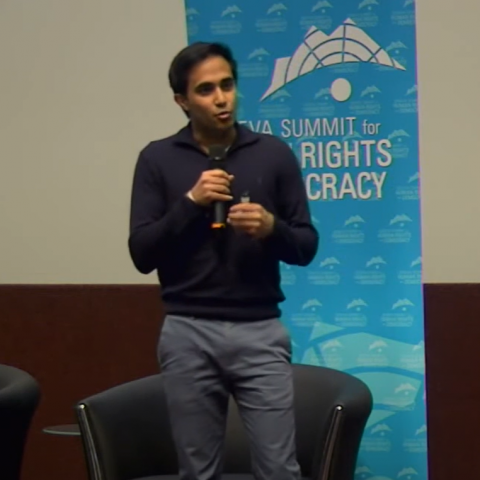 Mobilising the 98% with Taha Bawa

Taha Bawa, co-founder of Goodwall, the humanitarian and environmental social network that encourages people to actively contribute to society and seek to inspire others, addresses the 6th Annual Geneva Summit for Human Rights and Democracy – see quotes below, followed by full prepared remarks. Quotes: To Be Confirmed Full Remarks To Be Confirmed 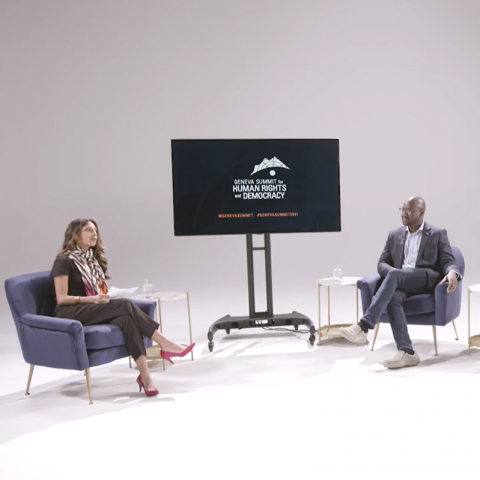 Full Transcript Moderator: Welcome to our panel on Champions for Change. I’m joined by three incredibly courageous individuals here: Evan Mawarire, pastor and democracy activist from Zimbabwe, Yang Jianli, a dissident from China; and Vladimir Kara-Murza, an opposition politician from Russia. So I’m going to dive straight in here, and, 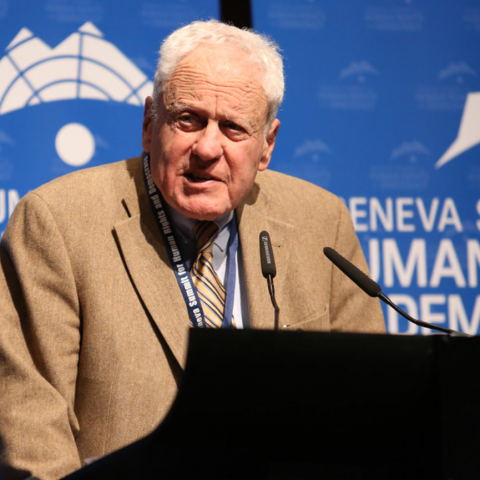 Alfred Moses, UN Watch Chair and a former special advisor to President Carter, addresses the 9th Annual Geneva Summit for Human Rights and Democracy – see quotes below, followed by full prepared remarks. On the legacy of the fall of the Berlin Wall: “After the Berlin Wall came down, and