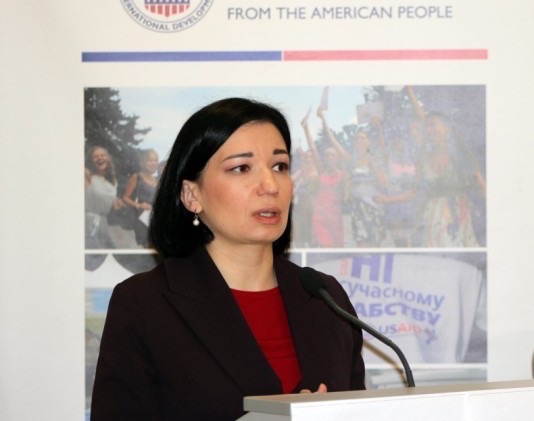 GENEVA, March 31, 2022 – A cross-regional coalition of over 25 human rights NGOs announced today that Olga Aivazovska, a displaced Ukrainian civil society leader and one of the chief advocates for a special tribunal on Russian war crimes, will speak at the 14th Geneva Summit for Human Rights and Democracy. The announcement comes a day after UN rights chief Michelle Bachelet said Russia may be committing war crimes in Ukraine, in her strongest comments on the conflict yet.

Aivazovska recently escaped Ukraine with her 11-year-old son, leaving her husband in the country to fight. She has since become a key advocate calling for Putin to be held accountable for war crimes, and has started documenting Russian atrocities through interviews with refugees crossing the border into Poland.

Prior to the invasion, Aivazovska was chair of Ukrainian civil society network Opora. She participated in talks to resolve the conflict in the Donbas from 2016 to 2018 and was consistently named one of the top 100 most influential women in Ukraine.

Aivazovska will be joined at the Geneva Summit by 20 other champions of human rights, who will all tell compelling personal stories of arrest and imprisonment by the world’s worst regimes. Speakers include Chief of Staff to Alexei Navalny, Leonid Volkov; NBA player turned human rights activist, Enes Kanter Freedom; and the youngest female mayor in Afghanistan’s history, Zarifa Ghafari.

Sponsored by a coalition of over 25 rights organizations including Liberal International and the Human Rights Foundation, the Geneva Summit will take place at the CICG in Geneva, Switzerland, on April 6, 2022.