GENEVA, February 18, 2016 — One of the world’s most prestigious international women’s rights awards will go this year to Vian Dakhil, a Yazidi member of the Iraqi parliament, and to German psychologist Jan Ilhan Kizilhan, for their “extraordinary and inspiring” work to rescue Yazidi and other women enslaved, assaulted, and sexually abused by ISIS in Syria and Iraq, a global coalition of 25 human rights organizations announced today.

Both laureates will personally receive the 2016 Geneva Summit’s International Women’s Rights Award at a major ceremony to take place this Tuesday, February 23, 2016, where they will address UN diplomats, several hundred human rights activists, and journalists from around the world attending the 8th annual Geneva Summit for Human Rights and Democracy.

Ms. Dakhil broke into tears during a parliament session in August 2014 while describing the plight of her fellow Yazidis during the onslaught by ISIS in northern Iraq.

Ms. Dakhil’s impassioned plea made the world sit up and take notice, and was instrumental in President Obama’s decision to order airdrops of urgent supplies and airstrikes against ISIS.

Due to her tireless work to provide solace for and rebuild the shattered lives of traumatized ISIS escapees, she is today at the top of ISIS’s hit list.

“I am honored to have been selected for this prestigious award on behalf of all women victims of ISIS,” said Dakhil. “The Yazidi community has been victimized by ISIS, especially the women and girls. The world needs to do more to release the girls in ISIS captivity and protect the human rights of all the people under ISIS control.”

Dr. Jan Ilhan Kizilhan is a German psychologist who operates a unique clinic in Iraq’s Kurdish region where he has treated over 1,100 female Yazidi and other victims of ISIS abuse, with the most severe cases sent to Baden-Württemberg, in southwest Germany, for a period of intensive treatment.

The $100 million “preventative asylum” project is funded by the Baden-Württemberg state government. For Dr. Kizilhan, himself a Turkish-born Yazidi who immigrated to Germany at age 6, it’s personal. Islamic State doesn’t see Yazidis like him as human.

“As a scientist you learn that ideology can blind people,” he told the Wall Street Journal‘s Sohrab Ahmari, who will also be participating at Tuesday’s Geneva Summit. “In the morning they rape children, and at night when they go home they’re loving fathers and husbands.” To treat ISIS as just another al Qaeda-style terror group, Kizilhan warned in his WSJ interview, is to ignore the “Nazi-like,” genocidal evolution of its Islamist worldview.

“On each of his visits to Iraqi Kurdistan, Mr. Kizilhan interviews dozens of women to identify those most in need of evacuation. Most are Yazidis and Christians, with smaller numbers of Shiite Muslims. He is now close to the program’s head-count limit, forcing him to make wrenching decisions as the women take him on a tour of the depths of Islamic State depravity,” reported the WSJ.

“I am honored to have been selected for this prestigious award on behalf of all women victims of ISIS,” said Professor Kizilhan. “The state government of Baden-Württemberg in Germany has brought 1,100 women and girls to Germany for treatment after they were released from ISIS captivity. Yet, hundreds more are still held captive and we need to keep on fighting for their release.”

Dakhil and Kizilhan were chosen “for their extraordinary work to protect the most basic human rights of Yazidi women” said Hillel Neuer, the executive director of UN Watch, a co-organizer of the conference together with Liberal International, Human Rights Foundation, and more than 20 other human rights groups.

The 2-day Geneva Summit will feature presentations by top-name activists, former political prisoners and victims from North Korea, China, Russia, Iran and many other human rights hotspots, with the aim of placing key issues on the global agenda days before UN chief Ban Ki-moon and numerous foreign ministers gather across the street to open the 10th anniversary session of the UN Human Rights Council.

For journalists, next week’s Geneva Summit provides a one-stop opportunity to hear from and interview frontline human rights advocates, many of whom have personally suffered imprisonment and torture.

The speakers’ compelling and vivid testimonies will press UNHRC delegates not to allow politics to override the cries of human rights victims. 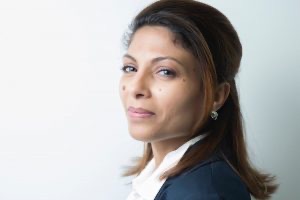 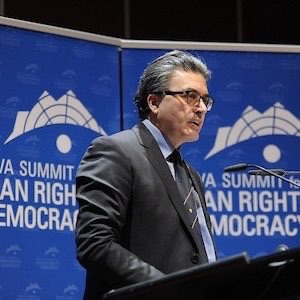 Nina Larson – February 28, 2016 Click here to view the original article Geneva (AFP) – One eight-year-old was repeatedly sold and raped, while another girl set herself on fire to make herself less attractive to her jihadist captors. These are only two of the more than 1,400 horror stories 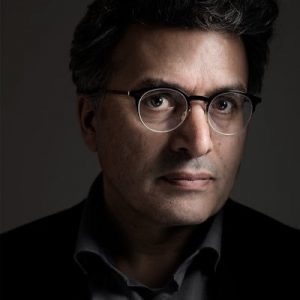 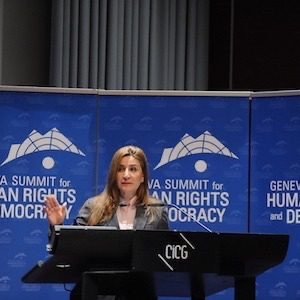