Please introduce yourself, your organization, and your human rights work.

My name is Shaparak Shajarizadeh, and I am an Iranian women rights activist. My activism began when I stood up against the compulsory hijab law in Iran, but then I had to leave my country. Right now, my advocacy involves calling out the violation of human rights against women and prisoners of conscience in Iran. I work with the Raoul Wallenberg Centre for Human Rights as a Senior Fellow.

Could you give our readers an overview of the plight of political prisoners in Iran, specifically in the context of Coronavirus?

It’s been three months since many human rights advocates and activists began calling on the government to release prisoners of conscience, political prisoners, and dual nationals from Iranian prisons. These prisons in Iran do have terrible hygiene. They are severely overcrowded and have no hospitals or treatment facilities, which puts the lives of prisoners at significant risk.

What’s terrible is that so many people are suffering in these prisons even though they are no threat to society. They have been jailed for the crime of speaking out against the regime. They are innocent people. On March 9th, Javahid Rahman, the U.N. Special Rapporteur on the situation of human rights in the Islamic Republic of Iran, called on the regime to release prisoners of conscience and dual nationals from prison. While the government claims that they have been released, hundreds of thousands of prisoners, especially high profile ones, are still languishing behind bars. In March, Nasrin Sotoudeh, a human rights lawyer who was my lawyer when I was in prison, started a hunger strike to protest the mistreatment of Iran’s political prisoners. The situation is very serious and needs urgent attention.

The first thing you face when the authorities arrest you is realizing that they can do anything to you and nobody is there to help. They won’t let you call or talk to your lawyer or family. During interrogations, they tell you that they can do anything to you. You realize that you are completely alone and that they are capable of the most evil things you can imagine, like things you have read in stories and watched in movies. Things you are surprised that even exist in the 21st century.

For example, one environmental activist, Sam Rajabi, got infected by coronavirus but instead of transferring him to a medical facility they sent him to solitary confinement. Just consider the famous human rights activists Narges Mohammadi and Atena Daemi. A few days ago while in prison, they were again charged with trumped-up accusations of participating in Iran’s protests last November. But, they were not even there. They were sitting in prison. Even so, they charged these women and are adding more years to their sentences. The authorities told Atena that she would not be released under any circumstances because they know that she is a high profile prisoner of conscience in Iran.

I have also been thinking about Kylie Moore-Gilbert in these last few months. She was arrested almost two years ago and was sentenced to prison for ten years. The authorities say that she is being kept in Evin prison, which is notorious for having high security and subjecting prisoners to solitary confinement. But, nobody has verified that she is in the women’s ward there. Nobody has seen her for at least a year and a half. Recently, Nasrin Sotoudeh’s husband wrote on Facebook that there was news of Kylie committing suicide three times. Sadly, I can really relate to her committing suicide. I can understand her. She has been kept in solitary confinement for over a year; even one hour in those cells is excruciating.

These women—Narges, Atena, and Kylie—are not free to express themselves at all. That’s why when I got out of Iran I decided to be their voice, because in prison you have no voice and the authorities can do anything to you.

What have you done to bring attention to the plight of Iranian political prisoners?

There have been a few things. First, I helped the Raoul Wallenberg Centre produce an open letter to the Vice President of the European Parliament which includes an joint appeal of human rights organizations calling for the release of prisoners of conscience in Iran. I helped to create the list of 50 prisoners who are still behind bars, even though there are far more. It was hard to find the exact names of prisoners in certain cities. I really wanted to have a list of the men inside the prisons but there were many obstacles and, originally, the list began with my female friends who are currently behind bars, so it came more naturally together this way.

To highlight the plight of Iran’s political prisoners, Professor Irwin Cotler, Yonah Diamond and I published an op-ed in Canada’s National Post. We wrote about two specific women’s right activists: Mohammadi and Sotoudeh. Our open letter has also been featured in the Jerusalem Post and Forbes, so it is good that the issue is getting the attention it deserves.

Also, on my social media accounts I have been calling attention to the ongoing arrests of other activists who have questioned the government for mismanaging the Coronavirus pandemic. I, along with many other Iranian activists, have been advocating for these prisoners since the start of the outbreak.

What do you believe democracies can and should do to pressure Iran to release political prisoners?

Unfortunately, in my point of view, democracies continue to look the other way. They see the violations of human rights in Iran and are not doing enough. One reason why is that the Iranian government has deployed an ideological army abroad that has been advocating on behalf of the regime. This is a political ploy to convince authorities of other countries that there are reformists inside the Iranian regime, but the reality is that there is no reform in Iran. The situation of human rights is getting worse and worse, day by day.

I want democratic countries to not ignore violations of human rights in Iran and to take action. Many of them know that the Iranian President and Foreign Minister have been lying to the world. Right now, the Iranian people want justice. They are people who lost family members and loved ones last November during the protests. They are campaigning for justice and just want to be heard. They feel alone, and the Iranian people expect democracies to step up, to pay attention to violations of human rights in Iran, and to not listen to the lies spread by the regime.

I am also disappointed in the United Nations. We expect them to care and not to ignore the situation of human rights in Iran and I hope that in the future, the United Nations will change the way they are dealing with the regime.

Have you faced any attacks online for your activism? If so, what has the nature of these attacks looked like?  How has it affected you?

I’ve been facing attacks for some time. They really began after I testified at the Canadian court for the first time around one and a half years ago. Then, I was under a lot of attacks. Now, as I see it, every time I do something and the more active I am, not only on my social media but also when I advocate or publish something, the attacks are harsher and go beyond targeting just me. People online have been attacking my family, even my son, and threatening my sister in the U.S. Some of the attacks are coming from people who support the government, but the regime itself has a huge cyber army that targets rights activists like me.

In the last few months, since coming to Geneva, speaking at the United Nations, and publishing my book, it has been worse. After publishing the National Post op-ed in April, it has gotten worse. These online bigots threaten other activists who are connected to me, and make them keep their distance from me.

Most alarming is that I have been attacked three times in the real world, in Toronto; twice on the street and once during a meeting. Those who attacked me were provoked by the lies and propaganda spread against me, all because I advocate for women’s rights and a better, more just Iran.

Could you share with readers the publication of your new book? What is it about and what inspired you to write it?

The name, La Liberté N’est Pas un Crime, is in French. But, in English it means “freedom is not a crime.” It is a story about my life as an Iranian woman, how I was born before the 1979 revolution and what life was like then. I share memories from my childhood and how I was subjected to domestic violence and there was no law to protect me. I also write about my life as a human rights activist and things that have happened to me over the past couple of years. Simply put, it is a story of an Iranian woman that reflects the experiences of so many in such countries throughout the Middle East who all have stories because we are subject to violence every day.

How can human rights activists or civil society actors help with your cause? What are ways they can join in the fight against Iran’s detention of political prisoners?

A critical part is to stand in solidarity with us and be united. The news coming from countries like Iran or other dictatorial regimes—China, Saudi Arabia, and others— is devastating, but we cannot give up speaking out for those who are in prisons because they have been our voice, and they are there because they are fighting for us. It is our duty to be their voice. So, we cannot give up. 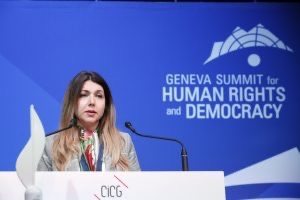 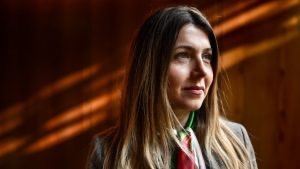 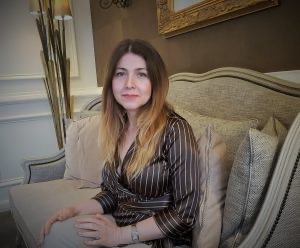