Twenty-four-year old Antonietta Ledezma, whose father now faces 26 years in prison under charges of “conspiracy,” and Julieta Lopez, the aunt of Leopoldo, accepted the awards at a major ceremony yesterday, Tuesday, February 23, 2016, and addressed a packed crowd of hundreds of human rights activists, UN diplomats, and journalists from around the world attending the 8th annual Geneva Summit for Human Rights and Democracy.

Ledezma and Lopez were chosen “for inspiring the world with their extraordinary courage in the defense of liberty and universal human rights,” said Hillel Neuer, the executive director of UN Watch, a co-organizer of the conference together with Liberal International, Human Rights Foundation, and more than 20 other human rights groups.

Ledezma was arrested last year in a violent police raid on his office, and thrown into prison. For medical reasons he is now under house arrest. The politically-motivated charges were only filed last week.

Opposition leader Leopoldo Lopez was sentenced last year to 13 years in prison on trumped-up charges. Last week marked two years that he has been behind bars, under cruel conditions.

Venezuela’s opposition-controlled legislature has just declared an amnesty for all political prisoners, however this was rejected by Maduro.

Julieta Lopez, aunt of Leopoldo, accepted on his behalf

After accepting the award on Tuesday, Antonietta called the mayor “a loving father, a loving friend, who is today illegally arrested in Venezuela.”
“I want to share with you how my life changed forever. 120 armed policemen smashed into my father’s office without a warrant. Was this an arrest? Was this a kidnapping? We didn’t know what was happening. For the longest 7 hours of my life, I didn’t know if my father was being tortured, if my father was even alive. This has been a terrible year for myself and for my family.”

Click here for video of her earlier remarks to the UN opening session on Monday.

“Leopoldo is honored to have been selected for this prestigious award, given by 25 human rights groups who will be assembling at the United Nations in Geneva, and to accept it on behalf of all of Venezuela’s political prisoners, who are currently being held illegally and in very difficult conditions,” said Lilian Tintori, the wife of Lopez.

“I hope this will put a spotlight on the systematic persecution of those who have dared to defy the regime and defend freedom through democratic means and will increase pressure on the Maduro regime to stop persecuting political opponents and free all political prisoners,” added Tintori.

“I thank the Geneva Summit coalition of 25 human rights groups for thinking of my husband for this prize, and he feels deeply honored. This award will only reaffirm our commitment to continue working towards recovering freedom for all our political prisoners, and for our democracy. By receiving this prize, we think of all the people of Venezuela who have loved ones suffering injustice behind bars,” said Mitzy Capriles, Ledezma’s wife.

The 2-day Geneva Summit featured presentations by top-name activists, former political prisoners and victims from North Korea, China, Russia, Iran and many other human rights hotspots, with the aim of placing key issues on the global agenda days before UN chief Ban Ki-moon and numerous foreign ministers gather across the street on Monday to open the 10th anniversary session of the UN Human Rights Council.

The speakers’ compelling and vivid testimonies pressed UNHRC delegates not to allow politics to override the cries of human rights victims. Speakers included:

The Geneva Summit successfully arranged for the speakers to be interviewed by dozens of media outlets worldwide. 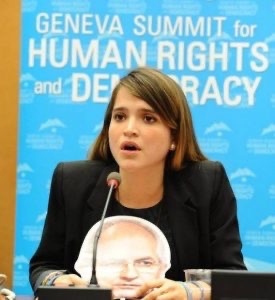 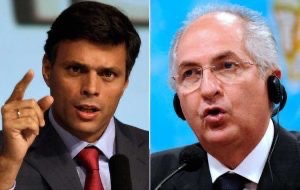