“Our Humanity Is At Stake”: A Uyghur Advocate on Why the West Must Learn to Make Sacrifices 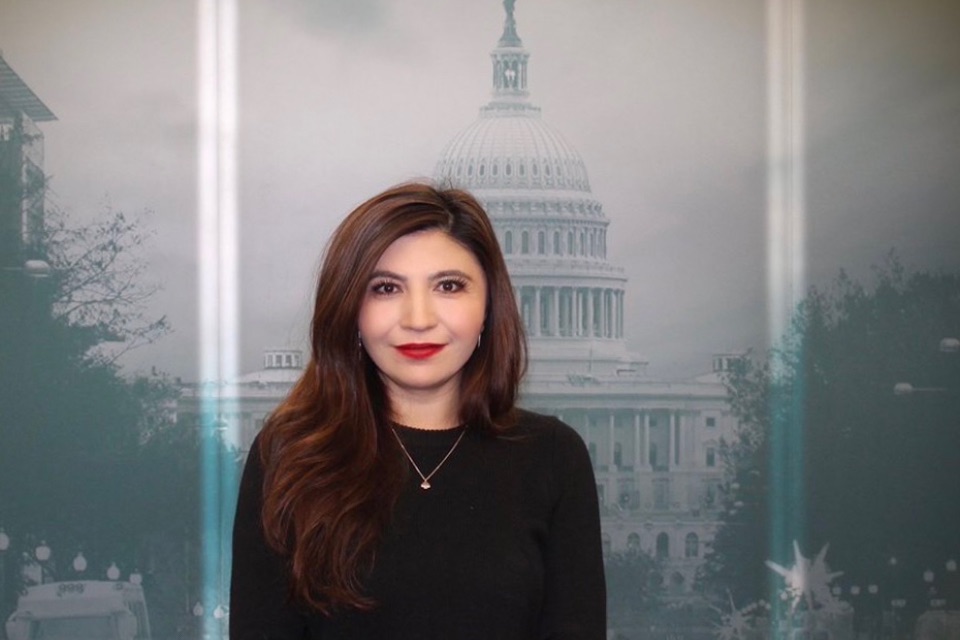 After the Beijing Olympics came to a close earlier this month, I talked to Uyghur attorney and Atlantic Council Senior Fellow Rayhan Asat (GS’21).

In 2016 Rayhan’s brother Ekpar disappeared. It wasn’t until January 2020 that the Chinese state officially confirmed what had happened. Rayhan wasn’t surprised when it did. Ekpar had joined the estimated one million ethnic Uyghurs detained in what China calls “re-education camps” — sites of torture and enforced sterilization that aim to erase the minority’s unique identity.

Ekpar’s is precisely the kind of case the Communist Party had hoped to cover up through the sportswashing that was the Winter Olympics. Yet Rayhan, also a fellow of Yale Law School and expert on international human rights law, refuses to let her brother be forgotten. Our conversation has been lightly edited for length and clarity.

Many now associate China’s Xinjiang province with the persecution of ethnic Uyghurs. But what was it like growing up there? Were you conscious of any tensions between your Uyghur and Han Chinese neighbors?

Given the ongoing crimes against humanity in Xinjiang it feels almost unreal to reflect that I had a normal childhood there. The landscape of the Uyghur homeland is beautiful, but it’s the people and the community that makes my homeland so wonderful.

I’ve lived in many parts of the world and been exposed to many beautiful cultures and traditions. As Rumi said, when you embark on a journey of love, it takes you from yourself to yourself. While I describe myself as a cosmopolitan, I’ve learned to love my culture even more in the circumstances. I love how Uyghur culture celebrates togetherness, unity and respect for each another.

“Our family was the only Uyghur family in the entire building.”

Growing up, I was a “daughter” not just to my family but to the Uyghur community. My parents raised me with particular sets of values, education, and aspirations, and I became a role model for many at a young age. Uyghurs use the phrase “daughter of Uyghurs” to describe women who are role models for younger generations. I’m very proud to be a benefactor of such a beautiful culture that cherishes women’s role in society. I love my glorious culture, people, their kindness and tradition. I’m proud of people’s resilience, peace-loving nature and determination to fight for dignity.

Our family was the only Uyghur family in the entire building. I grew up calling my neighbors uncles and aunts. My family kept a spare key in our Han neighbor’s home, and we shared trust, bonds and friendships. If my brother and I were locked out, we could get spare keys from the neighbor’s apartment without waiting for my parents to come home.

I’m mindful that many Uyghurs in the south were subject to discrimination due to Han supremacy. However, my experience was relatively normal. Occasionally, we felt our distinct identity and an institutional racism, when applying for passports or travelling to other mainland cities, with police checking our hotels. Because of our more western looks, we attracted Han people’s interest. However uncomfortable we felt at times, I always viewed it as curiosity rather than tokenization.

You later left Xinjiang to study at Harvard. In the final weeks of your program your brother Ekpar came to visit. Yet soon after he returned to China, you lost contact. He was a model citizen, commended by state media for building bridges between Uyghurs and Han Chinese. What happened? What does his case tell us about Communist Party policy in Xinjiang?

My brother Ekpar was forcibly disappeared by the Chinese government after returning from the prestigious State Department International Visitor Leadership Program. Many world leaders, including the current UN Secretary-General, have taken part in this program.

Unfortunately, Ekpar’s fate could not have been further from that of the other alums, because he was born into a race other than the pure Chinese race. Now he languishes in the shadows of a concentration camp, while others of his cohort go on to live full, successful lives. But that does not mean that he lives in vain, or that his story has no impact.

How did you hear he had disappeared?

My family were supposed to attend my Harvard Law School graduation. But they cancelled. They said they could no longer come, but it didn’t make sense why they would cancel at the last minute. I tried to reach out to my brother to ask for an explanation, but he was unreachable. He was nowhere to be found.

My parents never confirmed or denied what happened. They wouldn’t say anything.

I’m able to talk to my family, but the risks mean our conversation is limited to small talk. So though they know what has happened to my brother, they couldn’t discuss it openly. Like me they have been kept in the dark about where he is and what is happening to him. Even if we could talk about it, what they know is limited.

What happened to my brother shows that no one is spared in today’s Xinjiang. We were model citizens. But none of that mattered. The Chinese government’s current policy is driven by racist ideology and practice. Uyghurs should not be punished just for being born into a race they didn’t choose to be born into.

I’m incredibly proud of my brother, and of all the rightsholders in the camps whose resilience and dignity have been a shining example, encouraging me to be a better champion for human rights.

The official line on Xinjiang is that there are no human rights abuses, much less a genocide. So have you been able to break through to ordinary Chinese in your advocacy? How much awareness is there inside China of the situation?

I’ve always wanted to reach out to the Han people to seek their support. Initially, I made a video in Chinese and urged Han people to be allies, to be a Schindler for the Uyghurs.

That video reached millions of viewers on YouTube. Given that only prominent media outlets usually have such a broad reach, I was pleasantly surprised by the reaction and response.

“What happened to my brother shows that no one is spared in today’s Xinjiang.”

Then came Clubhouse [A chatroom app], which gave us a brief moment of exchange between Uyghurs and Han people. I spent days and weeks explaining what was happening in Xinjiang, but the Chinese government quickly shut down Clubhouse, and our last avenue of outreach was cut off.

I still try to tweet in Chinese, and also engage in private discussions with Han students to invite them to be allies and take action against the horrific abuses of their government. I can invite them to join us, but I cannot compel them.

Have you experienced any backlash while trying to explain what is happening in Xinjiang?

Not really, or not that I recall. But I’ll tell you something that I found really interesting. At one point I was tweeting in English and Chinese, talking about the fact that it had been 1500 days since my brother disappeared. A friend of mine from mainland China, a Han friend, sent me the tweet over WeChat in meme format.

I had shared a picture of me and my brother, and written about how painful our separation was. I assumed the Twitter accounts I was reaching were mostly overseas Chinese people, or some in China using VPNs. But this friend sent it to me as a meme, as a picture, because that makes it less likely to get censored.

I thought that my message was getting through. No matter how small. I was shocked, pleasantly shocked.

The situation in Xinjiang is intimately linked to Xi Jinping’s flagship Belt and Road Initiative, a plan to develop new trade routes connecting China to the rest of the world and increase its political influence. Three of the six “economic corridors” the initiative envisions pass through the province. So how do you think human rights violations in Xinjiang relate to China’s international ambitions?

Because of Xinjiang’s unique geographic location, it is viewed as a critical region to the success of the Belt and Road Initiative and to China’s global ambitions.

“the Chinese government has not hesitated to lock up innocent people simply for being who they are.”

Unfortunately, the phrase “whatever necessary” has defined the Communist Party’s securitization of the Uyghur region. Trying to reach its goals, the Chinese government has not hesitated to lock up innocent people simply for being who they are. This is in violation of every international law and norm.

So the US, UK, Canada and other countries have now called the Chinese treatment of the Uyghurs “genocide”, while bills bearing your brother’s name have been introduced in Congress. But what more should western states be doing to oppose the policies you mention? And is there anything individuals can do?

There’s so much to be done to bring an end to the mass atrocities currently being perpetrated against my brother and many other innocent people like him.

Even as this crisis has evolved, more and more Uyghur forced labor has reached western shores. The global economy is now tainted by Uyghur forced labor. When we import goods from the Uyghur region, we are importing human suffering. While countries like the US have now enacted legislation to counter Uyghur forced labor, other western counties have yet to follow suit. They must.

Our humanity and our dignity as bystanders is at stake. Russian aggression did not emerge overnight. It emerged because of a culture of impunity. We are living in a world where world leaders are prioritizing national interests, trade and business, while overlooking egregious human rights abuses. If the Uyghur crisis goes unaddressed, who’s next?

As Yale historian Timothy Snyder suggests, the politics of inevitability [the belief that the future will simply be more of the present] pave the way for pragmatism. States abandon values in favor of short term gain.

We cannot keep discussing what can or should be done against the world’s second most powerful state. If we simply accept what is happening without performing the mental gymnastics to seek creative solutions, then nothing will change.

“If the Uyghur crisis goes unaddressed, who’s next?”

In the Ukrainian context, we bore witness to a collective response by which liberal democracies were willing to pay the cost of defending democratic values. Those mechanisms that have been deployed against Russia should also be explored against China. Authoritarian governments always extent their reach. Uyghurs and the international community cannot afford to look the other way.

The Geneva Summit will this week award NBA player Enes Kanter Freedom its 2022 Courage Award for risking his career to ensure China’s treatment of the Uyghurs remains on the agenda. After broad boycotts of the Beijing Olympics, do you think athletes have a duty to use their platform to speak out against human rights abuses, or is this an unnecessary politicization of sport?

Celebrity support can catalyze public outcry and educate millions, helping to end this tragedy. I wrote an essay in The Hill entitled “We Need Another Hero” and called on athletes and celebrities to use their influence to be champions of human rights. I hope that athletes and other influencers can champion those ideals.