GENEVA, February 16, 2020 — Russia’s leading anti-corruption activist will put Moscow in the hot seat tomorrow at the United Nations just one week before foreign ministers gather in the same building to open the 2020 U.N. Human Rights Council.

Lyubov Sobol, a Russian lawyer and rights activist who has become one of the country’s best known opposition figures, will turn an international spotlight on Russia’s human rights abuses at the 12th annual Geneva Summit for Human Rights and Democracy, which opens on Monday, February 17th, at 1:30 pm at the United Nations European headquarters in Geneva, seat of the UN Human Rights Council.

Sobol is one of Russia’s biggest influencers, with over a million YouTube subscribers following her anti-corruption investigations. She has used her social media power to spark some of the biggest protests against Vladimir Putin’s government in over a decade — yet she’s barely featured on mainstream media, and is banned from standing for local election.

In October, the BBC named Sobol one of the world’s Top 100 influential and inspirational women. NPR called her “Moscow’s new opposition leader.” Sobol’s defiant activism for democracy was also recently profiled in the New York Times and The Atlantic.

When Sobol takes the floor at the UN tomorrow, she will discuss her anti-corruption work and widespread influence as the general producer of “Navalny LIVE,” a YouTube channel with over one million followers that calls out the authoritarianism of President Vladimir Putin’s government. Her social media reach has sparked some of the biggest anti-government protests in recent years.

Last year, Sobol ran for a seat in the Moscow City Duma but was illegally removed from the ticket by government authorities. In protest, she went on a hunger strike while helping other independent candidates campaign during the election.

Her appeal to the UN comes as Putin continues to jail dissidents, journalists, and political opponents, and seeks to cement his rule indefinitely with proposed constitutional reforms.

“Lyubov Sobol is a courageous opposition leader in a country where free speech and political dissent can often lead to jail and worse,” said Hillel Neuer, the executive director of United Nations Watch, a co-organizer of the conference together with Liberal International, Human Rights Foundation, and more than 20 other human rights groups.

“Her testimony ought to stir the conscience of the UN, and the world, to address Putin’s crackdown on opposition groups and the critical human rights situation in Russia, which is currently a member of the UN committee that oversees human rights NGOs,” he said.

Sobol joins human rights heroes gathering from around the globe

Sobol will join other courageous champions of human rights from around the world at this year’s Geneva Summit, including dissidents, activists, victims, and relatives of political prisoners from Iran, Cuba, China, Mauritania, Turkey, Venezuela, Pakistan, and Vietnam, who will be testifying on the human rights situation in their countries.

Subjects on the program this year include discrimination against women, child marriage, arbitrary detention, prison camps, religious intolerance, and the persecution of human rights defenders.

Admission to this year’s February 18th summit is free and open to the public, but registration is mandatory.

For accreditation, program, and schedule information, visit www.genevasummit.org. The conference will also be available via live webcast. 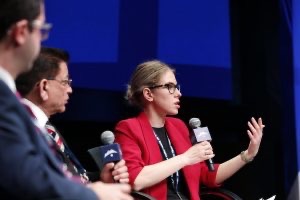 Interviewed by Dylan Rogers. Shortly after Russia went to the polls this September, I sat down with opposition leader Lyubov Sobol (GS’20). At 34 Sobol occupies an idiosyncratic place in Russia’s pro-democracy movement. She has been with the now-imprisoned Alexei Navalny from the start, joining his anti-corruption campaign in 2011.