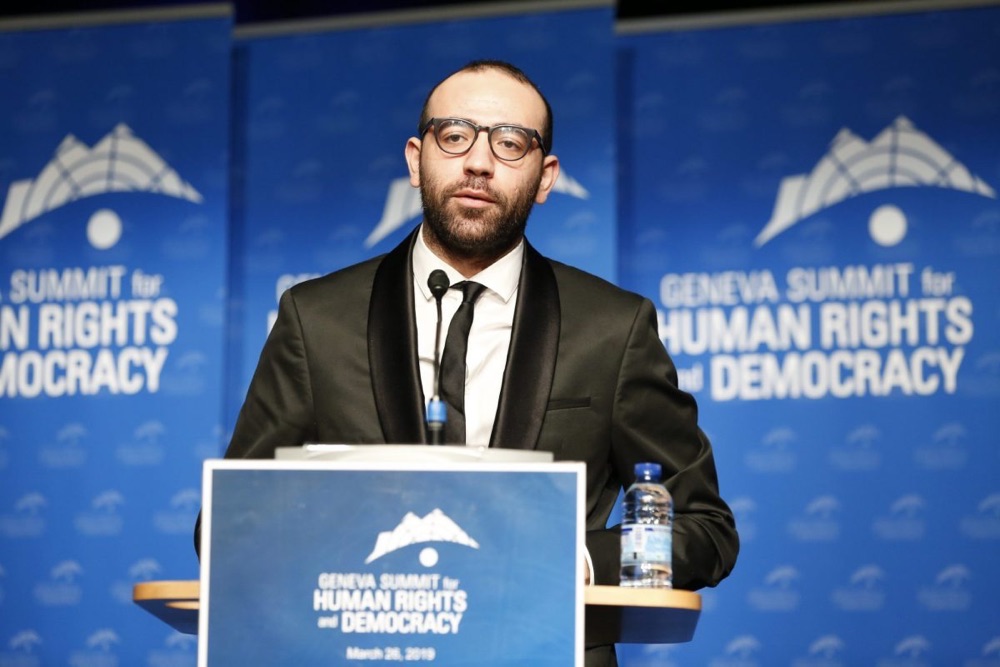 Abdalaziz Alhamza, award-winning journalist and co-founder of Raqqa is Being Slaughtered Silently, which exposes the atrocities committed by the Assad regime and ISIS, addresses the 11th Annual Geneva Summit for Human Rights and Democracy – see quotes below, followed by full prepared remarks.

On becoming a citizen journalist:

“The local media was talking about what would happen to the earth if the sun would disappear while Syrians were dying in the street, so I decided to do something.”

“The next day I went to the street with my old Nokia phone. I went back home and uploaded the video and I noticed that my video went viral. In that moment, I learned about something called citizen journalism.”

“I started to use that to tell the world about what was going on in Syria, and that was a reason for the Syrian regime to arrest me. I was tortured, but I was lucky enough to be released.”

On taking on ISIS:

“We decided to stop the recruitment regime of ISIS. And since we started the number of people joining ISIS went down.”

“We started to do campaigns showing how ISIS people were eating in fancy restaurants, while local people were starving waiting in lines to get some food.”

“We went to the most dangerous streets of ISIS and we tagged the walls with graffiti against the Assad regime and ISIS.”

Hello, thank you for coming today.

My name is Abdalaziz Alhamza, I am a journalist, human rights activist, and rights defender. I came from Syria, from a small city called Raqqa. In March 2011, the Syrian Revolution started against the Syrian regime. I was one of the people who hit the street asking and calling for freedom as many Syrians did. We didn’t ask for anything else but the way that the Syrian regime reacted by killing people and arresting them pushed me to be more involved in the Syrian uprising.

The next day I went to the street with my old Nokia phone and I started to record the protest. I went back home. I uploaded the video and I noticed that my video went wild. Many TV channels, newspapers, and publications started to talk about it. In that moment I believed in something called ‘citizen journalism’ and I started to use that as a way to tell the world about what’s going on in Syria. About the atrocities that have been committed by the Syrian regime.

That was a reason for the Syrian regime to arrest me. I got arrested three times, I got tortured but I was lucky enough to be released unlike many of my fellow Syrians who have been caught in torture, caught up in several ways by the Assad regime. We are the Syrian people. We are the people who’ve been caught by rockets, by barrel bombs, by attacks, by chemical weapons, under the watch of the international community, and the watch of the UN, and the watch of everyone, and no one could do anything.

They were all watching a dictator killing his own people and they couldn’t do anything. Later on, another group rose up in my city. My city, called Raqqa, which is in Northeastern Syria. It is a forgotten city until recently when a group called ISIS came. They came into the city and they controlled everything. They changed every single small thing in the city. I wasn’t expecting to have these kinds of groups in my country. I was like you watching them on the TV and never ever thought that that would be something I will witness in my life.

Soon after I witnessed the first public execution. I was walking in the street and ISIS killed three people without mentioning the reason, without mentioning why, and without mentioning who they were. At that moment people hit the street, they started to protest against ISIS, as they did against the Assad regime, but later on when ISIS controlled the whole city, I was forced to leave because I couldn’t stay there anymore as ISIS tried to arrest me by coming to my parent’s house. I was lucky enough not to be there for the second time, unlike many others who’ve been arrested, tortured, killed, kidnaped, and right now there are many prisoners who were arrested by ISIS with their families waiting for a word or with luck any piece of information about them, but they haven’t received any.

We started our reporting working in two teams. The first team in Raqqa and Syria sending in news for the second team which is based outside. We started by reporting in news, sending photos and videos out of the city, and then we noticed that we were able to make a change with the media. The media hadn’t heard about ISIS back in that time, we got the attention of the media, we started mini-campaigns, we decided to stop the recruitment machine of ISIS, and since we started the number of people who were joining ISIS started to be less and less.

We did many campaigns like one called “The Other Side” to show the propaganda of ISIS, showing them eating in a fancy restaurant, and calling Raqqa and their territories a heaven, while local people were starving waiting in lines to get some food. We did many other online campaigns, we decided to do also some resistant movement. We went to the street of the most dangerous strongholds of ISIS where we tagged the walls with graffiti against Assad and ISIS. Recently we came up with a magazine. Our magazine had the same cover as the ISIS magazine so that was the easiest way to reach out to the biggest number of workers in the country. We would distribute our magazine which would have like a completely different context than the ISIS magazine but that was a way to keep people safe so in case, they would be stopped by any ISIS fighters they would say that we thought it’s your own magazine. It was a way to send messages to the locals themselves. While we were sending information out, it was equally so important to send information inside.

Certainly ISIS is not the only force that is responsible for the death of Syrians. Recently ISIS has been defeated in Syria, as it was announced all over the media, but for us we believe that ISIS is not only a military group or a militia. ISIS is an ideology and we’ve seen ISIS everywhere with the attacks. ISIS was able to recruit people all over the world and for us we believe that fighting that ideology can’t be with bombs, it can’t be with airstrikes.

If we need to fight an ideology, we need to fight it with an idea. So that’s what we do. We continue to do mini-campaigns in Raqqa right now, we talk and work with people who lived under ISIS control. At the same time, we address other forces who committed atrocities in Syria. I can start and mention many governments and countries but I would not be able to mention all of them.

It’s so important to address that there are tens of governments and hundreds of groups and militias that are involved in the death of many Syrians. I’m here standing and calling on you if you are a politician, if you are a person in power to help the Syrian people.

Just spread their words and to each of you who are just ‘normal’ individuals – don’t say that you can’t do anything. Each of you is an activist. With my old Nokia phone I recorded the protests and it went wild. So each of you has a phone, you can tweet, you can write, and just today we saw four different causes. From earlier today we saw the ‘Free Uyghurs” presenter so I want to ask you if you have a phone, you will take it out and post the hashtag #FreeUyghurs as you may be the tweet that makes a difference. 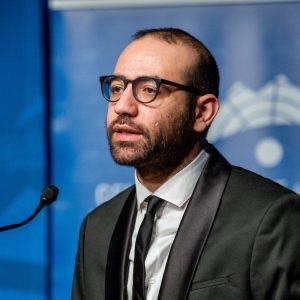 Award-winning Syrian journalist, co-founder of Raqqa is Being Slaughtered Silently 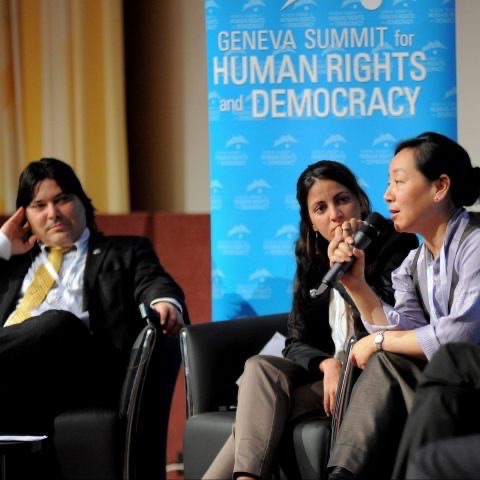 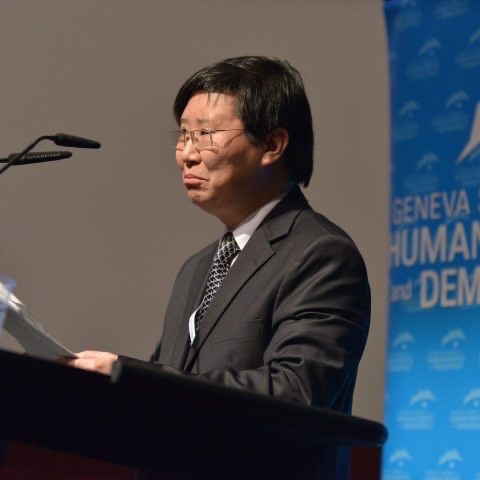 The Fight for Fundamental Freedoms with Dang Xuong Hung

Dang Xuong Hung, a diplomat who defected from the Vietnamese Communist Party, addresses the 6th Annual Geneva Summit for Human Rights and Democracy – see quotes below, followed by full prepared remarks. Quotes: To Be Confirmed Full Remarks To Be Confirmed

Tenzin Dhardon Sharling, youngest member of the Tibetan Parliament in exile, addresses the 6th Annual Geneva Summit for Human Rights and Democracy – see quotes below, followed by full prepared remarks. Quotes: To Be Confirmed Full Remarks To Be Confirmed