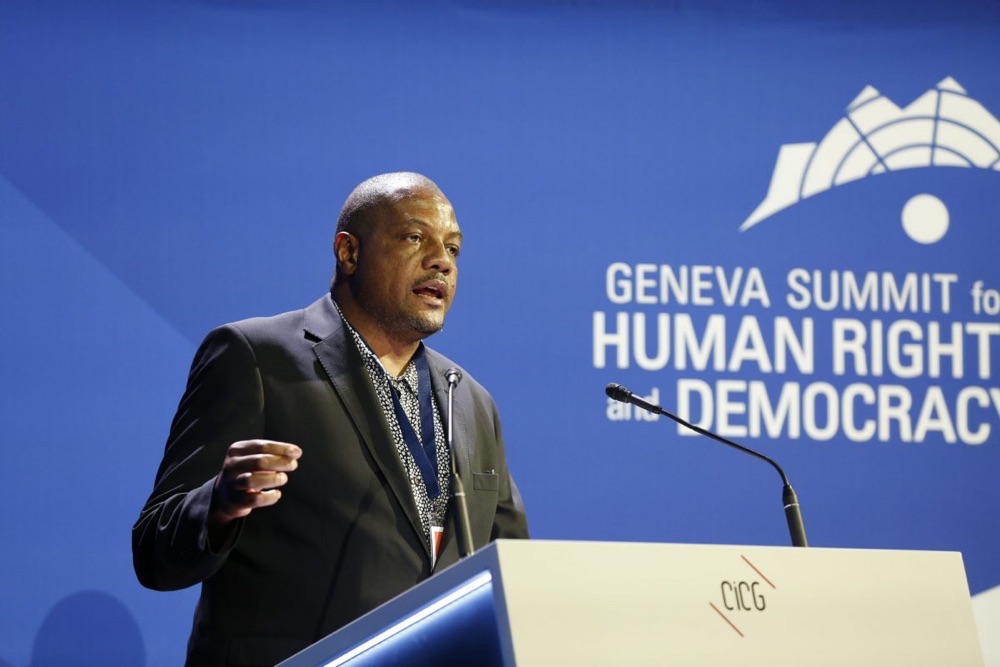 On attacks on free speech in Zimbabwe:

“Being here is a remarkable feat considering that I’m coming from Zimbabwe. You never know whether you’ll be allowed to leave the country or be arrested at the airport for having done nothing.”

“Why are we so poor, yet the country is so wealthy?”

“I would move houses everyday fearing abduction by State security agents. Other critics were abducted and disappeared for days, only to be released having been tortured.”

“In Zimbabwe, arrest is a tool of persecution used to silence journalists, critics, and the opposition.”

“But I refuse to be silenced. We must hold the corrupt to account for their actions.”

Being here is a remarkable feat considering that I’m coming from Zimbabwe.

You never know whether you’ll be allowed to leave the country or be arrested at the airport for having done nothing.

I was born 51 years ago at Harare Hospital, Zimbabwe’s biggest hospital.

Today it has only two maternity theaters, and only one of them is working.

It only costs US$37,000 to build a maternity theater. But the ruling ZANUPF Government has never built a single maternity theatre at the biggest hospital in Zimbabwe for the past 42 years it has been in power, and we are still counting.

The government has blamed everyone except itself when 2500 Zimbabwean pregnant women die each year from childbirth — that’s the equivalent of 16 jumbo jets carrying only pregnant Zimbabwean women crashing every year and killing everyone on board.

The average Zimbabwean citizen was not aware of these painful statistics until I started reporting on them regularly in the news. As a journalist, I ask questions like WHY such things were allowed to happen in Zimbabwe.

Why are we so poor, yet the country is so wealthy?

I studied journalism at university in Zimbabwe, then moved to England to get a master’s degree, and it was there that I learned to be a foreign correspondent.

While I was away, the ruling party ZANUPF had become so unpopular that the party’s President Robert Mugabe and his goons embarked on a violent land reform campaign killing white farmers and looting their properties in a desperate attempt to gain support.

Anyone perceived to be against the violent farm seizures was called a Western puppet. This is how the ZANUPF ruling elites deflect genuine and legitimate criticism – the assumption is that black people can’t think for themselves.

As the violent land seizures continued, so did the attacks on foreign journalists who were stationed in Harare. They were called agents of Western imperialism, and they started kicking them out one by one.

So when the BBC correspondent was kicked out, I asked the then editor if I could do the job.

We agreed, and I moved back to Harare, only to realize just how much things had changed in the nine years I was away.

When I applied for accreditation as a BBC correspondent, my former lecturer, now in charge of accreditation, declined but then called me privately to his office.

He told me that it was an instruction from the top to deny me accreditation and that my once best friend at journalism school, Supa Mandiwanzira, was the regime’s media gatekeeper.

So I went back to England, this time to study Documentary Film. Upon returning, I made an award-winning documentary film called Pain in My Heart, looking at HIV and Aids in Zimbabwe.

When the foreign news editor at Britain’s ITN News saw the film, he hired me to cover Zimbabwe.

It was one of the most defining episodes of my career.

This was 2008, and there was a major election slated for the 29th of March of that year, but the Zimbabwe Electoral Commission refused to accredit me to cover that election.

Privately, insiders told me that I’d been declared a national security risk.

As you can see, like all authoritarian regimes, everything requires accreditation in Zimbabwe. We often joked that we might even need accreditation to buy a beer.

I covered the election anyway, and when ZANUPF and Robert Mugabe lost that election, they refused to relinquish power or even release the results.

Instead, they attacked our citizens with ruthless violence, and I found myself at the center of it as the first journalist to break the post-election violence story on international television. I also found myself looking over my shoulders as the state security and police officers started tailing me and other journalists to instil fear in us.

I would move houses every day, fearing abduction by State security agents. Other critics were abducted and disappeared for days, only to be released having been tortured.

By the time things calmed down, the state had murdered hundreds of its opponents.

And after a coup in 2017, the military killed six civilians in cold blood during post-election protests.

And since then, since President Mnangagwa took over, he’s proven to be even more brazenly corrupt than Mugabe ever was. His corruption has destroyed our economy, healthcare system, and other public services. To understand the terrible economic decay of my country, when I started my journalism career in 1991, Zimbabwe’s economy was bigger than that of Kenya. Thirty-one years later, in 2022, Kenya’s economy is five times bigger than that of Zimbabwe. And one in two Zimbabweans lives in extreme poverty.

I set up an organization I named Save Our Hospitals. This gave me a wide-open window of opportunity to see the healthcare system up close and very personal. I became an accidental investigative journalist.

I learned that all of Zimbabwe’s six central hospitals only needed US$50 million a year to run efficiently, yet doctors and nurses had no gloves. There was, and still is, no medication either.

The amount of money being looted every month in smuggled gold alone could run all central hospitals for two years without any shortages.

When Covid-19 hit in January 2020, I started using Twitter and Facebook to expose how the government had destroyed our public healthcare system, which led to a local politician organizing an anti-corruption march for the 31st of July 2020.

On the 20th of July, seven officers with AK47s came to my home, broke the French door leading to my dining room, and dragged me out of the house, walking barefoot on top of broken glass.

I was denied bail twice, and I spent 45 days in prison without trial.

When I came out of prison, I learned that the President’s niece was caught trying to smuggle 6kgs of gold at the airport. But because she was the President’s niece, the national prosecution service they were planning to give her bail unopposed. I exposed this corrupt deal online, and a couple of days later, I was arrested again. Initially, they said I’d broken my bail conditions for my pending case. But in police custody, they changed the charge and said I’d obstructed justice.

She was indeed offered bail unopposed, but the courts intervened, probably out of embarrassment that I had reported about it.

I spent 23 days in prison without trial, and the charge is still pending 17 months later because the state failed to bring the case to trial.

I was arrested again in January 2021 and charged with tweeting falsehoods, something I had not done, and I was charged with a law that doesn’t even exist.

I spent 21 days in prison without trial, and the High Court eventually threw the case out.

In Zimbabwe, arrest is a tool of persecution used to silence journalists, critics, and the opposition.

But I refuse to be silenced. We must hold the corrupt to account for their actions.

Perhaps with my little efforts, I will leave Zimbabwe a better place than what it is today. 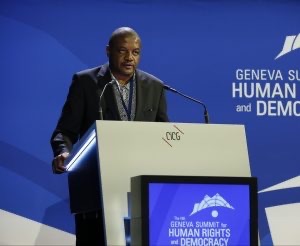 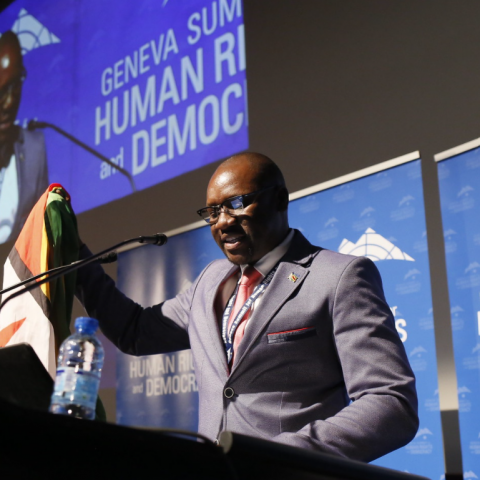 Zimbabwean pro-democracy dissident and protest leader Pastor Evan Mawarire addresses the 10th Annual Geneva Summit for Human Rights and Democracy – see quotes below, followed by full prepared remarks. On starting #ThisFlag movement for change in Zimbabwe: “The mantra of #ThisFlag was, if we cannot cause the politician to change, then 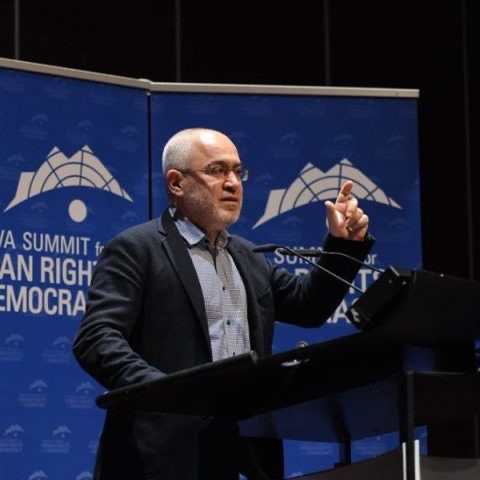 Orhan Kemal Cengiz, a Turkish human rights lawyer and journalist, addresses the 8th Annual Geneva Summit for Human Rights and Democracy –  see quotes below, followed by full prepared remarks. On press freedom in Turkey: “Then they started to sue journalists who said that Erdogan is a dicator, or Erdogan 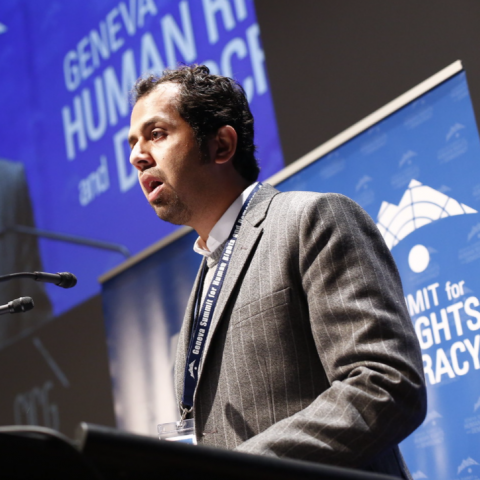 Journalists under attack: the Case of Pakistan with Taha Siddiqui

Pakistani journalist and social media activist, Taha Siddiqui, who narrowly escaped a recent abduction attempt, addresses the 10th Annual Geneva Summit for Human Rights and Democracy – see quotes below, followed by full prepared remarks. On attacks on journalists in Pakistan: “To a visitor, it may seem that the media in