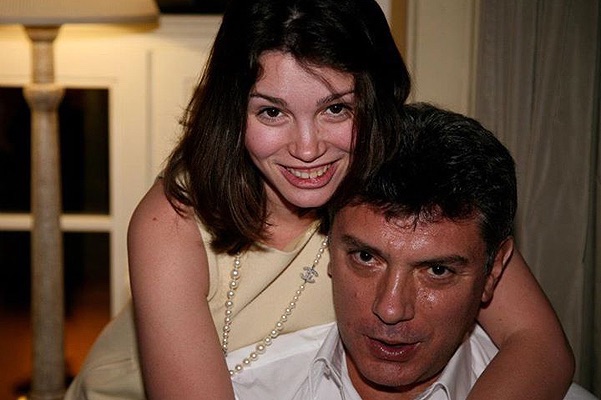 Zhanna Nemtsova, one of today’s Geneva Summit speakers, with her late father Boris Nemtsov, former Russian Deputy PM assassinated in 2015 for his criticism of Putin.

GENEVA, Feb. 20, 2017 –  Dissidents, diplomats, and NGO representatives from around the world have gathered in Geneva for a two-day summit opening today aimed at giving voice to victims of the world’s worst human rights abuses.

The 9th annual Geneva Summit for Human Rights and Democracy, organized by an international coalition of human rights NGOs, opens today at the seat of the UN Human Rights Council, on the eve of its opening 2017 session next week.

The summit organizers say they will focus on issues the UN session – under pressure by its powerful members – has not included on its agenda.

A high-profile North Korean defector, and a Yazidi woman who wrote a book about being an ISIS sex slave, will also speak.

Mohamed Nasheed, the veteran human rights activist who was elected president of the Maldives only to be arrested and jailed as a political prisoner, will be one of the keynote speakers. See presenters below.

“It’s a focal point for dissidents worldwide,” said Hillel Neuer, executive director of the Geneva-based UN Watch, which for the ninth year in a row will be organizing the annual event together with a cross-regional coalition of 25 other human rights groups.

“The speakers’ compelling and vivid testimonies will aim to stir the conscience of the U.N. to address critical human rights situations around the world,” said Neuer.

Subjects on the program this year include discrimination against women, jailing of journalists, prison camps, Internet freedom, religious intolerance, and the persecution of human rights defenders.

Admission to this year’s February 21, 2017 summit is free and open to the public, but registration is mandatory. For accreditation, program and schedule information, visit www.genevasummit.org. The conference will also be available via live webcast.

For media inquiries or to request interviews, please email secretariat@genevasummit.org

On the eve of the U.N. Human Rights Council’s 2017 session,
courageous champions of human rights from around the world will
unite to place urgent situations on the international agenda.