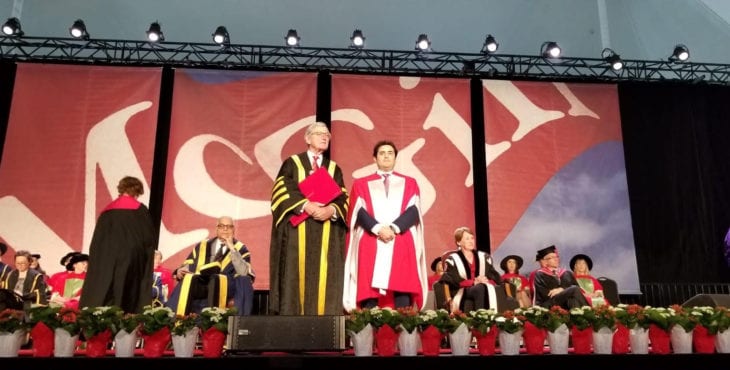 MONTREAL, June 5, 2018 – McGill University today recognized the important work of the Geneva Summit for Human Rights and Democracy when it awarded its highest honor to its founding chair, Hillel Neuer, executive director of the Geneva-based UN Watch.

In its citation, McGill recognized the Geneva Summit as “a cross-regional coalition of 25 non-governmental organizations that, over the past decade, have successfully placed an international spotlight on urgent human rights situations,” giving a global platform to “courageous dissidents and champions of human rights from around the world.”

Neuer was awarded a Doctorate of Laws, honoris causa, for his work to advance peace, justice and human rights. See full citation at bottom.

In his convocation address, Neuer dedicated the award to dissidents and political prisoners, and he spoke of the inspiring example set by Geneva Summit speakers Yang Jianli of China, Rosa Maria Paya of Cuba, and Vladimir Kara-Murza of Russia.

Human rights activists, dissidents, and former political prisoners from around the world, together with other public figures, have welcomed the award; see statements and tweets below.

Yang Jianli, former political prisoner, leading Chinese human rights dissident:
Congratulations to Hillel Neuer on being selected by McGill University for an Honorary Doctorate of Laws. Hillel surely deserves such an honor. Hillel is one of the world’s most committed, energetic human rights leaders. He has helped the cause of human rights and democracy in many countries including my homeland China particularly by giving us a platform at the United Nations. His constant and passionate voices stirs the consciences of the world’s statesmen and the public and rallies diplomats, scholars, activists, students and business people to the cause of defending basic human freedoms within the borders of the most powerful countries such as China, which so many world leaders are afraid of confronting about human rights issues. I can never thank Hillel enough for the wonderful work he does.

So proud of Hillel Neuer, selected by McGill University for an Honorary Doctorate of Laws.

Exiled Turkish journalist and human rights dissident Yavuz Baydar
The decision by McGill University to choose Hillel Neuer for an Honorary Doctorate is without a doubt an excellent one. It’s been an honour for me to know Hillel for a long time to observe how dedicated he has been in making freedom fighters all across the world to be heard. His special concern was on Turkey, and the constant deterioriation of rights and freedoms there, which meant that Hillel has remained engaged in giving the floor to Turkish journalists, intellectuals, and human rights defenders from my country bringing their plight to the attention of the world. Hillel is an utterly important figure in the context against the oppression, and this choice was a well-deserved one.’

Ugandan LGBT activist Kasha Jacqueline
A well deserved honor. On my own behalf and that of the LGBTIQ people in Uganda and the world at large, I thank you for always giving us a platform & a network to share our plight, joys & hopes for a more secure ,peaceful and a just world. I congratulate you comrade.

Cuban human rights activist John Suarez
Congratulations to Hillel Neuer for being recognized with a Doctor of Laws, honoris causa, from McGill University for his defense of human rights. Cuban human rights defenders owe a debt of gratitude to Hillel and UN Watch for their solidarity over the past 15 years.

Canadian human rights icon Irwin Cotler
Delighted that Hille lNeuer — one of the best of my former students and courageous human rights warrior — will be receiving an Honorary Doctorate from our joint alma matter McGill. Hillel is one of the most eloquent and effective advocates today for human rights of the most vulnerable. As the McGill citation put it, “Hillel has been an innovator at the UN in creating global platforms for courageous dissidents and champions of human rights from around the world” — and I’ve been privileged to participate in these incredible forums that have international resonance.

Canadian Senator Linda Frum
So delighted to learn that Hillel Neuer of UN Watch will be awarded a well deserved Honorary Doctorate of Laws from McGill University. Hillel Neuer is one of the great human rights champions of our time. In a life devoted to promotion of truth, justice and freedom, Neuer is a true giant.

Leading campaigner against Russian human rights abuses Bill Browder
Congratulations to Hillel Neuer for being awarded an honorary doctorate at McGill University for his pioneering work on human rights. He has dedicated his life to helping victims of human rights abuse and speaking truth to power of institutions like the UN who should be doing more. McGill alumni Hillel Neuer is an international lawyer, writer, and the Executive Director of UN Watch, a human rights NGO that supports the just and apolitical application of the values and principles of the United Nations Charter.

Prior to joining UN Watch, he practiced commercial and civil rights litigation at the international law firm of Paul, Weiss, Rifkind, Wharton & Garrison LLP, where he represented high profile individuals and corporations. Active as a defender of human rights, he challenged the New York State prison system in Reynolds v. Goord, a precedent-setting First Amendment case for prisoners’ rights and freedom of religion, published in the AIDS Litigation Digest. Mr. Neuer was cited for the high quality of his pro bono advocacy by the United States Federal Court, as reported in the New York Law Journal. In Hines v. Widnall, he challenged the United States Air Force as an advocate for African-Americans claiming a pattern and practice of racial discrimination in hiring and promotions. As an international lawyer, he helped five Bulgarian nurses win a major case in their torture complaint against Libya, Nenova et al. v. Libya, before the United Nations Human Rights Committee.

Mr. Neuer has testified regularly before the United Nations Human Rights Council on behalf of victims in Darfur, China, Russia, and Venezuela, and the cause of peace in the Middle East. He has been an innovator at the UN in creating global platforms for courageous dissidents and champions of human rights from around the world. As founder and chair of the annual Geneva Summit for Human Rights and Democracy, he leads a cross-regional coalition of 25 non-governmental organizations that, over the past decade, have successfully placed an international spotlight on urgent human rights situations.

An expert on UN and human rights issues, Mr. Neuer has been quoted by the New York Times, Die Welt, and Le Monde, and has appeared in debates on CNN, BBC, and Al Jazeera. U.S. Congressman Howard Berman, speaking as Ranking Member in the House Foreign Affairs Committee, described him as “one of the strongest and most informed critics of the UN Human Rights Council.”

The Honourable Irwin Cotler, human rights advocate and lawyer, has said that “if you want to pursue justice, you must feel the injustice around you.” Hillel Neuer lives by those words and has been a voice for those without one. UN Watch has been a lone voice for truth and for justice both at the “Parliament of Man” and in the international media. Admired for his achievements, the City of Chicago declared September 15, 2016 to be “Hillel Neuer Day.”