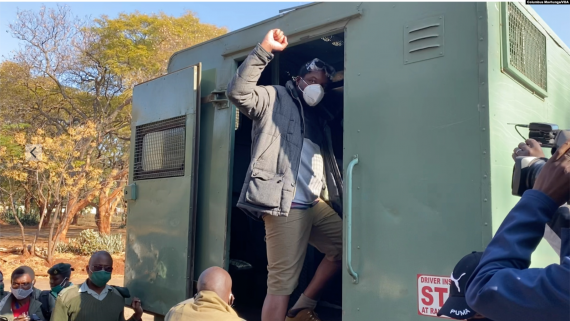 GENEVA, March 27, 2022 – By-election results released Sunday revealed that Zimbabwe’s ruling ZANU-PF party had suffered significant losses in a vote viewed as a dry run for the country’s 2023 general election. President Mnangagwa’s party lost 19 of the 28 constituencies contested to a growing opposition movement which will be spotlighted at the April 6 Geneva Summit for Human Rights and Democracy.

The 14th annual event will hear from Hopewell Chin’ono, an investigative journalist and opposition leader imprisoned three times in the past two years. Chin’ono will explain the corruption at the heart of Mnangagwa’s government and evaluate the opposition’s chances in the 2023 elections before an audience of dissidents and diplomats from around the world.

Reflecting on the results, Chin’ono said “it is a time to perfect our act and win change for all citizens including those in ZANU-PF. The work to undo corrupt rule begins from today!”

Chin’ono will be joined at the Geneva Summit by 20 other champions of human rights, who will all tell compelling personal stories of arrest and imprisonment by the world’s worst regimes. Speakers include Alexei Navalny’s Chief of Staff Leonid Volkov, Cuban dissident Rosa Maria Paya and award-nominated actress and rights activist Nazanin Boniadi.

Sponsored by a coalition of over 25 NGOs including United Nations Watch and the Human Rights Foundation, the annual Geneva Summit will take place at the CICG in Geneva, Switzerland, on April 6, 2022.

Zarifa Ghafari, Afghanistan’s youngest-ever female mayor and survivor of three Taliban assasination attempts, who escaped Afghanistan in 2021 by hiding in the footwell of a car on her journey to the Kabul airport.