Iran: Jailed, Tortured & Abused by the Regime with Ebrahim Mehtari 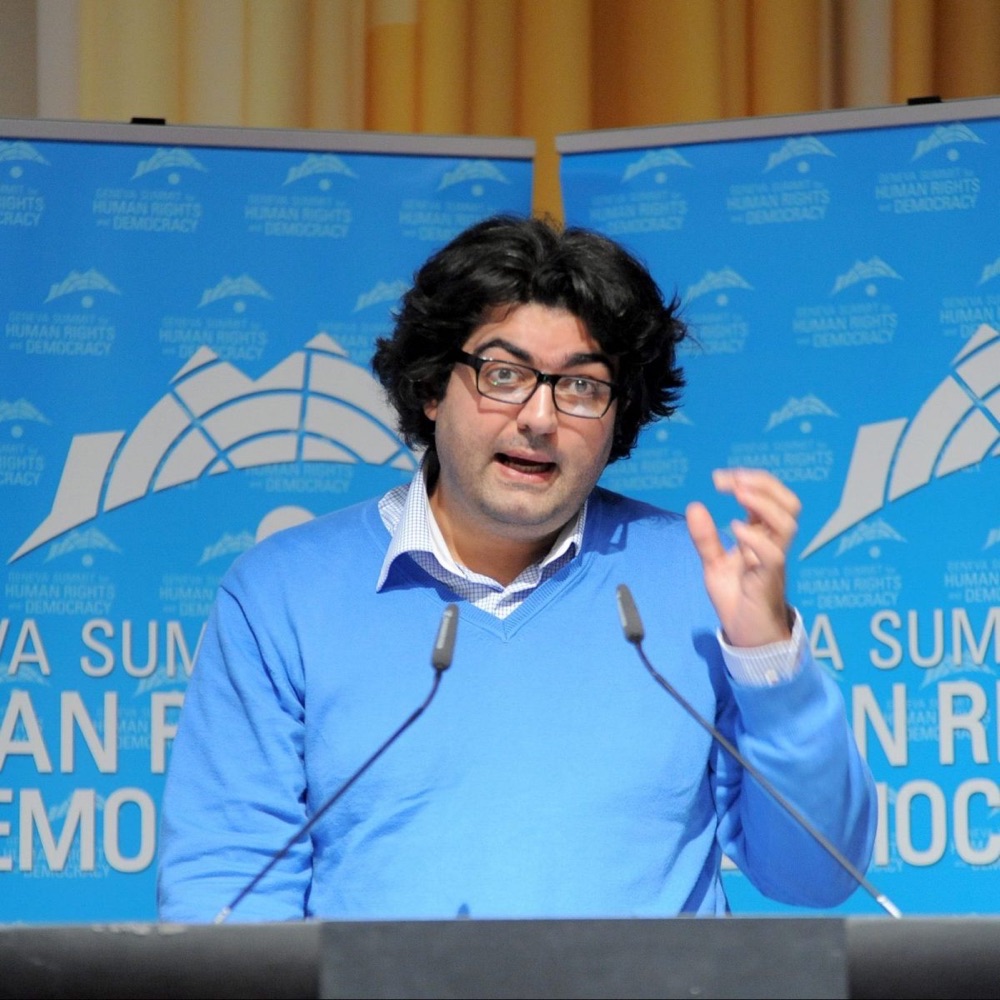 Ebrahim Mehtari, Iranian activist who was arrested, jailed, tortured, and physically abused by the Iranian Regime after taking part in the Green Movement demonstrations of 2009, addresses the 4th Annual Geneva Summit for Human Rights and Democracy – see below for full prepared remarks.

Tom Gross: In fact, we’ve already gone through a spring, a summer, a winter and then back to a second spring. But one might argue that the Arab Spring really began two years earlier, and was inspired from neighbouring Iran, following the rigged June 2009 presidential elections and the crackdown that followed.

Ebrahim Mehtari was working as a software engineer and was arrested in June 2009 for demonstrating against the government, in Iran. He was tortured and raped in prison. He was burned with cigarettes all over his body. He was tortured in other ways too and had to have surgery following his release. As soon as he could, after he was released, he fled to Turkey and has since been given political asylum in the European country where his life is still in danger, as he continues to campaign against the Iranian regime.

He is one of the very few to speak out openly about sexual torture in Iranian prisons, Ebrahim.

Ebrahim Mehtari: Ladies and gentlemen, I speak in memory of victims fallen in combat for freedom and human values in Tunisia, Libya, Bahrain, Yemen, Egypt, Iran, and Syria. In the past 32 years, the inseparable part of the system, the regime, was downplaying human rights, as can be accurately depicted in the full report by Dr. Amit Shahid. After the hijacked election of June 2009, the repression became so widespread that even former employees of the regime were not spared. On the other hand, the number of Internet users in Iran, the existence of networks such as Facebook, Twitter, Google+, YouTube, Flickr, made it possible to disseminate news of human rights infringements worldwide. The government has tried to silence these critical voices, and even outside the country, by introducing censorship, by pressure on the remaining independent newspapers, by a recent questioning of reporters, by prohibiting satellite TV, by banning parties by the independent trade unions, the student organisations. Also, trying to impede the reception of satellite channels, trying to arrest activist students by Internet filtering or [by] cutting off the internet altogether, pressuring members of the families of those who are reporters but are out of the country, by arresting the members of religious minorities, etc.

The voice, however, started in Tehran. One could hear the footsteps of people marching for freedom. I was proud of the Iranian youth as it was the first revolution of [the] electronic age. The government had to deal with this green movement. It was green, it is green and it will remain green and it was repressed with incredible ferocity by the army. The movement is now under ashes and is waiting for a flame. The freedom-loving forces added the Arab Spring to world [of] political science and in a few countries, managed to overthrow dictatorships. The government of the Islamic Republic, instead of learning the lesson and adopting democratic rule of law and recognizing human rights as stipulated in the Universal Declaration of Human Rights, has turned to the way of repression. Even [the] Syrian uprising was pictured as engineered by the West. Worse than that, it helped Syrian rulers to repress its own people.

I insist that freedom-loving people of Iran are critical of the Iranian government’s stance in this matter and wholeheartedly support Syrian people’s aspirations for freedom and democracy overthrowing dictatorships.

Ladies and gentlemen, that truth is that the Islamic government has a black record in a matter of human rights. The humanitarian values, the human rights, absolutely have no place [in] that government. The number of death sentences and executions increased over the last year. The minors, under 18, have [been] ordered to be executed. The same is true also for the execution of political asocials and sentences [for] religious minorities and arrests of the reporters, arresting condemnation, which is even contrary to the laws, even the constitution, of the Islamic Republic itself. There is of course torture in prisons, the repression of the women’s organizations struggling for women’s rights, closure of newspapers, or forcing these newspapers to practice self-censorship, disbandment of political parties, prohhibition of NGOs – all of that is part and parcel of the tools used by the government.

The average age of the population is telling. Iran has one of the youngest populations in the world. This younger population strives for contacts and dialogue with the world. The number of internet and social networks grows daily. The number of users of [the] internet is increasing daily. Now, there are millions of members of Facebook, Twitter, Flickr, Google+, YouTube and such networks.

In the events which followed the hijacked election of June 2009, pictures, news, videos have been disseminated throughout the world. The government has been trying for years to restrict the usage of [the] internet through filtering and combating activities but there are a number of activist bloggers. There are some people like Hossein Derakhshan, the ‘father of blogging’ in Iran, was tortured to death after long imprisonment in solitary. Hossein [] Maliki, a young brilliant scientist, had an even worse fate. Another person committed suicide. [inaudible name] received his death sentence. The state is doing what it can in order to filter the internet and there is a special committee set up, it’s called [the] Committee for Filtering, and its job is to filter the websites. It has included hundreds of thousands of websites; not only pornographic sites or the ones for opposition, but various other sites as well. And there has been a special counsel for oversight of [the] Internet. Then the government, in addition to filtering the internet, has also closed the input to VPN and has also, on the basis of a law which now has been ratified by the Parliament and for the common users of the Internet, [it] can have only a speed of 128 kilobytes per second.

Now, the guardians of the Islamic revolution have created a group called the cyber army. This cyber army does tracking, hacking of the emails of opponents and steals internet identities. The Islamic government has also been dealing with some European companies. These companies have helped the Islamic Republic to filter [the] internet and that equipment allowed the government to hack the emails of many opposition users by using their SSL. Unfortunately, the contention was not so much on this, rather, it was on commercial dealings on the one hand and left the government free to repress the opposition, and the West [which has] been concentrating on nuclear program issues. Such companies, such as Nokia and Siemens, provide the technology for spying on telephone conversations.

The strategic mistake of the international community is that it is not providing sufficient attention to the infringement of human rights in Iran. It is concentrated on the nuclear program of Iran, rather than what is happening in the field of civil society and NGOs. Of course, it is important to prevent Iran [from] obtain[ing] the nuclear bomb, but bringing pressure to Iran to stop its nuclear program is not the right way to a definite solution; the pressure may slow down but cannot stop concealed nuclear programs. The government could continue its nuclear program in a hidden way. The only way to stop Iran from acquiring the weapons of mass destruction, from supporting terrorist groupings around the world, and from becoming known as the enemy of peace and democracy in its region, is to inspect the application of human rights in that country.

A powerful civil society, by being present, will limit the possibilities of the government to outstep the law. That could be a greater help to world peace. For this reason, [in] insisting on the implementation of human rights in Iran and making the government responsible for non-observance of these rights, the world community would have greater support from the people of Iran and will [] get the results it is striving for [sooner]. I thank you. 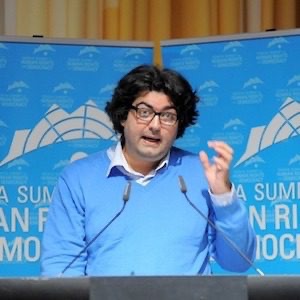 Activist in Iran’s Green Movement, arrested and tortured by the regime 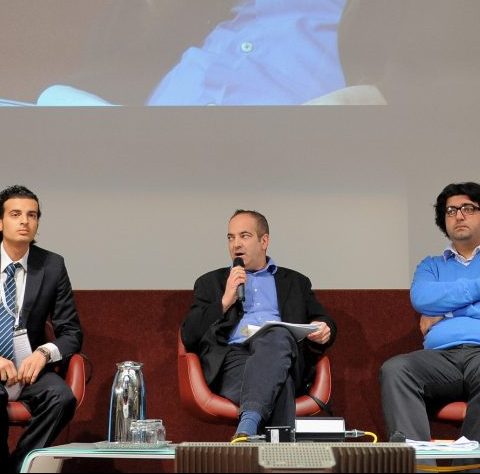 A panel including journalist and commentator specializing in the Middle East and human rights, Tom Gross; Iranian activist who was arrested, jailed, tortured, and physically abused by the Iranian Regime after taking part in the Green Movement demonstrations of 2009, Ebrahim Mehtari; and an Egyptian blogger and political activist, Maikel 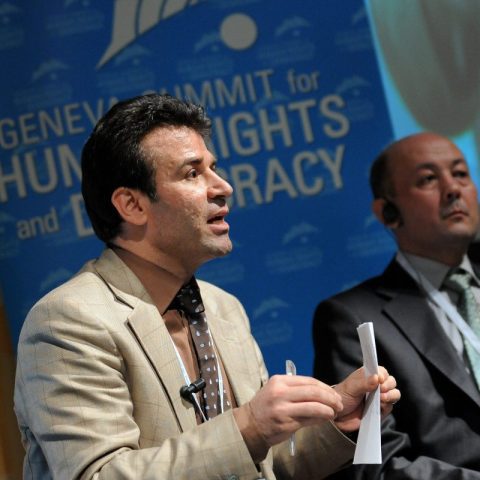 A discussion with Iranian human rights lawyer who has fought numerous women’s and children’s rights cases in Iran, Mohammad Mostafaei; Norwegian politician and Vice President and of the International Federation of Liberal Youth, Naomi Ichihara Røkkum; and Chair of ‘Turkmen Initiative for Human Rights’ (TIHR), an activist group that gathers 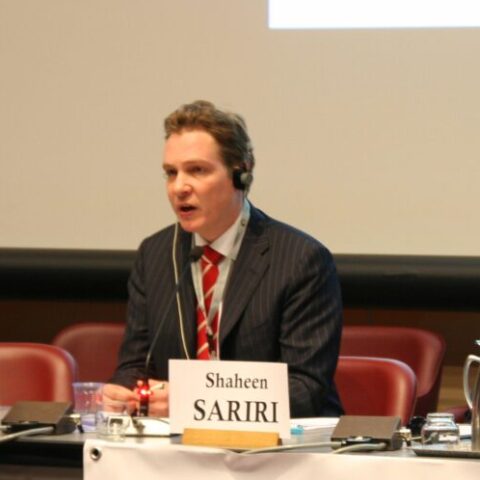 Stéphane Bussard, former Le Temps US correspondent in New York, and David Suurland, a Ph.D. and co-founder of the Foundation for Freedom of Information who has written extensively on political Islam, address the 2nd Annual Geneva Summit for Human Rights and Democracy – see below for full prepared remarks.   Full remarks   David 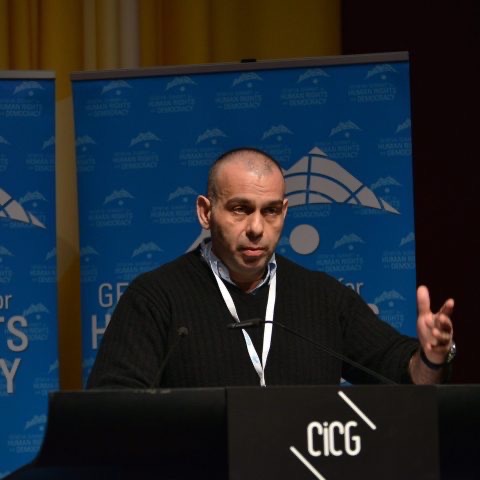 Finding the Truth in Iran with Potkin Azarmehr

Potkin Azarmehr, Iranian activist and blogger who left Iran for the UK after the revolution of 1979, since becoming a key activist resisting religious extremism and political intolerance in Iran, addresses the 6th Annual Geneva Summit for Human Rights and Democracy – see quotes below, followed by full prepared remarks. Quotes: To Be