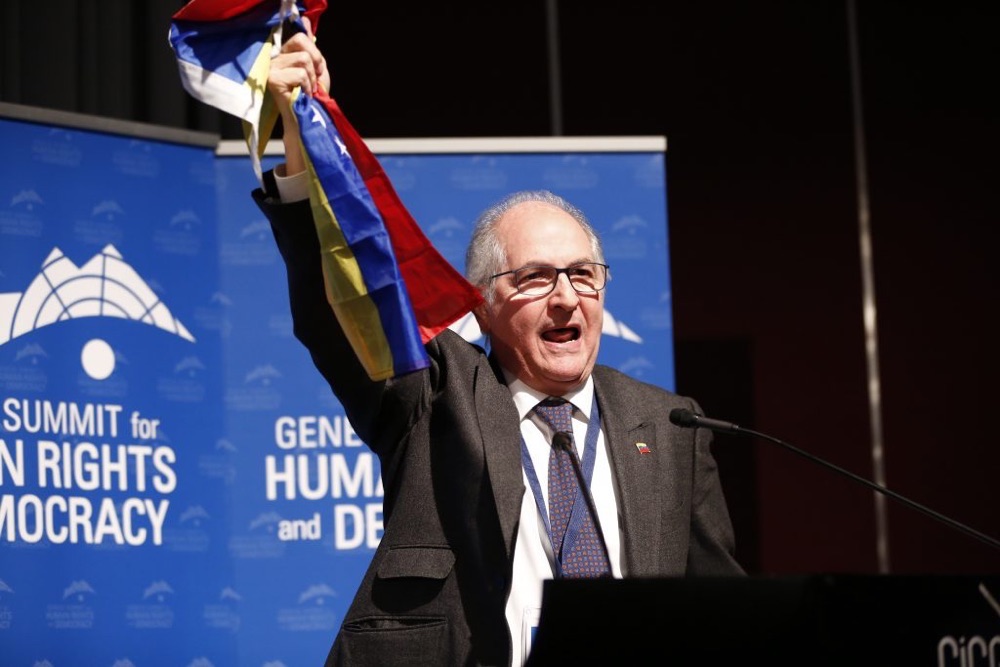 Above: Antonio Ledezma, exiled Mayor of Caracas, delivers an address at 10th Geneva Summit for Human Rights and Democracy, February 20, 2018. His daughter, Antonietta, represented him the two previous years at the Geneva while he was a political prisoner in Venezuela.

Geneva, Feb. 20, 2018 – Dissidents, diplomats, and NGO representatives from around the world gathered today in Geneva to give voice to victims of the world’s worst human rights abuses. See selected quotes below; for more click here.

The 10th annual Geneva Summit for Human Rights and Democracy, organized by a cross-regional coalition of human rights groups, began this morning on the sidelines of the UN Human Rights Council, which opens its 2018 session next week with foreign ministers coming from around the world.

Today’s Geneva Summit testimonies have focused on issues the UN session—under pressure by its powerful members—have not included on its agenda, or only marginally.

Luis Almagro – Secretary General of the Organization of American States and former Foreign Minister of Uruguay: “There is no gray area when it comes to fundamental freedoms.”

Pastor Evan Mawarire – Leading Zimbabwean opposition activist, arrested as he led a church service for his campaign protesting Mugabe: “The message from our new president is: “Zimbabwe is open for business, but the question we should be asking is whether Zimbabwe is open for freedom.”

Maziar Bahari – Iranian-Canadian journalist, filmmaker and human rights activist: “I would like to be in Pastor Mawarire’s place in a few years – to see the fall of a dictator.”

William Browder – Hedge fund manager who spearheaded successful campaign to adopt the Magnitsky Act, a U.S. law sanctioning Russian oligarchs: “My hope is that [the Magnitsky Act] becomes a standard tool for fighting impunity in the world. I hope it will send chills down spines of dictators and totalitarian despots who are ruining the lives of their population.”

Asli Erdoğan – Turkish novelist jailed for 133 days as as a political prisoner: “The situation [today] gets more and more grave as the silence of the international community deepens.”

Guillermo Fariñas Hernández – Psychologist and journalist fighting corruption in Cuba who has conducted 23 hunger strikes and has endured 11 years in prison for his defiance of the Cuban regime:  “Many people say that the devil is in Venezuela but his head is in Cuba.”

Yang Jianli – Chinese dissident, former political prisoner, Tiananmen Square survivor and President of Initiatives for China: “We should be grateful to these heroes who remind us that dictators are bound to fail.”

Julienne Lusenge – Leading women’s rights champion fighting rape as a weapon of war in Congo: “We want Congolese women to not to just be victims of sexual violence, but to be the drivers of change in their own country.”

Effy Nguyen – Son of Nguyen Trung Ton, detained Vietnamese human rights defender and pastor: “Please save my father who has exhausted his mind and body for the cause of freedom and democracy. Please save my mother, a political prisoner’s wife who struggles to sustain the family.”

Taha Siddiqui – Pakistani journalist and social media activist who narrowly escaped a recent abduction attempt: “I currently have been living in exile since last week and do not know when it will be safe to head back, but I will ensure that I continue to raise voice for the rights of Pakistani public and that is why I made it here today.”

Lam Wing-kee – Abducted by Chinese authorities for selling politically sensitive books in Hong Kong: “From October to December 2015, shareholders and staff members of the Causeway Bay Books disappeared one after another.”

Farida Abbas Khalaf – Freed Yazidi ISIS slave, author of “The Girl Who Beat ISIS”: “It is true that I tried to suicide 7 time and I tried to escape two times – the third time I succeeded.”

Golog Jigme – Tibetan monk and human rights activist: “It isn’t possible to share all the torture I was subjected to, due to the time limit. When I was put on the iron chair it was horrible, beyond a human being can imagine.”

Kasha Jacqueline – Ugandan LGBT activist, founder and director of Freedom and Roam Uganda: “Our struggle needs a face because we want people to know they’re not alone in the villages when they’re told that they’re possessed by demons.”

Antonio Ledezma – Venezuelan opposition leader, political prisoner who escaped in November 2017: “My heart is throbbing. I suffer from the thought of my country. This country is experiencing martyrdom. In that last three years more than 300,000 Venezuelans have died.”

Maryam Malekpour – Sister of Saeed Malekpour, Iranian developer serving life sentence in Evin prison on spurious charges: “I was forced to leave Iran in 2012 when I discovered that the Iranian authorities had issued a warrant for my arrest. They were angered that I was speaking to the media about my brother’s situation.”

Fred and Cindy Warmbier – Parents of Otto Warmbier, American student tortured in North Korea: “The Kim family chose to do this, they used Otto as a pawn, a hostage, and they did this in front of the world. This is their message that if they’ll do this to Otto, imagine what they’ll do to the rest of the world and their own citizens.”

Kenneth Bae – Survivor of North Korean gulag, longest-held American prisoner: “North Korean constitution allows the freedom of religion but in reality, they only allow worshipping of their leader Kim Ilsung.”

Vladimir Kara-Murza – Leading dissident against Putin regime, Chairman of Boris Nemtsov Foundation, survivor of two poisoning attempts: “Every time the Russian people could actually choose, in a more or less free election, between dictatorship and democracy, they chose democracy.”